With the California Farm Bureau effectively giving away the right of farmers to repair their own equipment without involving the distributor in the spring of 2019, the right-to-repair movement fell back on its heels. Horrified by the ground lost, the group has rallied to better incorporate those hoping to fix or modify mobile devices and automobiles. Despite being disparate products, members share a common goal of returning control to consumers and preventing various industries from having a stranglehold on products they were supposed to relinquish ownership of when sold.

Hoping to better illustrate the plight of farmers, Bloomberg published an article outlining one man's struggle with John Deere. Kevin Kenney is a Nebraska-based engineer who's also a member of a grassroots campaign to undermine the corporate mandate against repairing its tractors. He believes farmers owe it to themselves to know how to fix their own equipment or risk finding themselves perpetually at the mercy of the manufacturer --- while losing the skills to be self-reliant.

Why should you care? It's presumed automakers will follow a similar business plan as vehicles become increasingly networked and electric, and as executives redefine what constitutes ownership while using proprietary software as their shield. Pretty much exactly what John Deere is doing.

Kenney and company started a movement that now seeks to establish right-to-repair laws across the country, with 20 American states now entertaining the possibility of enacting new legislation. It even attracted the attention of Senator Elizabeth Warren when she was still campaigning for the Democratic presidential nomination. She endorsed the platform in the spring of 2019. The brunt of the movement, however, still rests with small business owners and consumer advocacy groups interested in supporting the proverbial little guy.

"People just want to fix their stuff. We are tired of manufacturers price-gouging for repairs, selling us disposable electronics and pushing us to buy new instead of fixing what we already have. It's should be no surprise that interest in the right to repair keeps growing, with 20 states filing bills already this year," Nathan Proctor, the U.S. Public Interest Research Group's Campaign Director for Right-to-Repair, said in a statement last year.

"Electronic waste is the fastest-growing waste stream in the world. It's high time we stopped manufacturers from blocking repair, which keeps devices working and off the scrap heap. It's better for consumers and better for the environment, and whether or not manufacturers like it, more and more people agree: We deserve the right to repair our products."

[John Deere] says the world needs digitized farming to feed the 10 billion people expected on Earth by 2050. The proprietary software Kenney and other repair advocates revile enables sensors and computers on machines to log and transmit data on everything: moisture and nitrogen levels in soil; the exact placement of seeds, fertilizer, and pesticides; and, ultimately, the size of the harvest. Having access to so much real-time data enables farmers and their computer-controlled machines to plant, spray, fertilize, and harvest at optimal times with as little waste as possible. All the farmer has to do is link his equipment to agronomic prescriptions beamed to him over the internet.

This is farming's version of big data, and the potential is staggering, enthusiasts say. The efficiency gains of recent decades have increased productivity an estimated 1.4 [percent] per year for the past 70 years, and U.S. farmers now produce an average corn yield of about 175 bushels an acre. That's still less than 30 [percent] of what some hyper-attentive farmers have shown is possible under optimum conditions. Deere and other agriculture technology companies are betting that what the industry calls "precision agriculture" can dramatically expand output.

While Mr. Kenney acknowledged the digitization of farm equipment has helped increase agricultural productivity, he's fearful that too much of the power is being transitioned to machines and the companies that unilaterally control what happens to them.

Modern-day tractors log data just like automobiles, with manufacturers scooping up that info as it's transmitted to the cloud. Why can't farmers, at-home mechanics and your average person attempting to fix their own iPhone handle it themselves? We don't know for sure, but John Deere says it isn't safe, what with farmers only having an implied license to operate a vehicle they purchased.

"One tweak could cascade throughout an entire software system and lead to unintended consequences," Julian Sanchez, Deere's director of precision agriculture strategy and business development, suggested.

Digital-rights activists say this is bunk, with many claiming this is all being done to consolidate control among original equipment manufacturers.

"We've been telling people for years that if it has a chip in it, it's going to get monopolized," Gay Gordon-Byrne, executive director of the Repair Association, told Bloomberg . She's been working with Kenney for years and helped get legislation passed inside Massachusetts in 2012 that required the auto industry to provide car owners and independent mechanics with the same diagnostic and repair equipment used at the dealership.

However, Gordon-Byrne and Kenney don't always see things eye to eye. Concerned that smaller farmers won't be able to compete with the high-cost of new equipment and manufacturer-sanctioned repairs, they're working together to advance right-to-repair legislation in states with less-powerful equipment lobbies and smaller farms. But when he attempted to dazzle her with a photo of a 2017 John Deere combine he had modified on the sly, she urged him to exercise caution, saying the changes could fall outside copyright law and amount to theft of services.

"Gay, thanks but why was it OK years ago to pull the diesel engine fuel pump off, screw the horsepower up, put it back on, and run it with no consequences of 'theft'?" he responded. "Just because these engines are now electronic vs. mechanical, we've lost our rights to repair and modify? Back in my day we truly believed, Hot-Rodding is a National Birthright!" 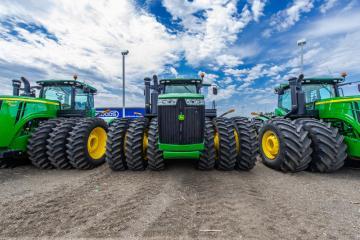