You have to give BMW credit for persistently protecting the name of the car that started the company's renowned M performance division.

As much as the bean-counters in Munich must be itching for a full M version of its 1 Series hatchback they could charge even bigger money for, BMW's most senior executives continue to insist it remains linked only to the 1979 M1 -- the short-lived, wedge-shaped, homologation-inspired sports car.

The fastest version of the original 1 Series hatch was simply called the 130i Sport, before the next-generation model introduced the M135i that morphed into the M140i. The M2 name for the firm's fastest compact coupe is no problem, of course, but there was that awkward 1 Series M Coupe stage of the early 2010s in an effort to work around the revered M1 name.

The M135i badge returns for the new, third-generation 1 Series, which is controversial -- at least among driving purists -- for its switch from rear-wheel drive to a front-drive-based chassis in a move to broaden its appeal (as it did with the X1 compact SUV).

However, an 'xDrive' addendum for the M135i badge denotes the company's first all-wheel-drive hatch in Australia. The previous 1 Series was available with AWD in some overseas markets, but not here.

And then there's the engine that produces 225kW and 450Nm compared with the 103kW/220Nm of the 118's three-cylinder turbo. Commendably, BMW's engineers have extracted the close to same power and torque outputs out of the four-cylinder as they did with early versions of the former, six-pot M135i -- and not too far short of the final M140i's 250kW/500Nm.

BMW quotes standing-start acceleration of 0--100km/h in 4.8 seconds, though it says a tenth can be knocked off that by opting for the $1900 M Sport package that includes smaller, lighter forged-alloy 18-inch wheels and an overboost function. It also adds some gloss-black exterior bits, though perhaps more importantly it allows buyers to switch from passive to adaptive dampers for $400 (they don't fit with the standard 19-inch wheels).

With its maximum torque lobbing in from just 1750rpm and cranking all the way to 5000rpm, the M135i proves to be unquestionably swift. When in Sport mode, the engine's response from varied areas of the rev range, including just off idle, is even more impressive.

Higher gears at lower speeds? No problem. There's just a touch of lag down low when in Comfort mode.

It's effortless but not effervescent performance. There's a rumbly induction note enhanced via the speakers, but the prominent pops and crackles you get from the exhaust pipes of the A35 and S3 rivals are conspicuous by their absence.

Perhaps the jolts from the eight-speed auto on flat (paddle) shifts was one of BMW's solutions to tuning some more drama into the M135i's acceleration. The transmission is otherwise hard to fault in hard driving, and it's certainly a smooth operator in regular driving.

On-demand all-wheel drive, of course, means you can pin the throttle in tighter corners earlier than with the M140i, even if some drivers may be disappointed only up to 50 per cent of torque will hit the rear axle.

The M135i's resistance to understeer is aided on the front wheels by a Torsen limited-slip differential, plus an anti-wheel-slip system that BMW first put into use to tame the instantaneous torque of its i3 electric car.

It's a car that's happy to be chucked around, even if the M135i, at 1525kg, is one of the heaviest hot hatches around.

Strong front-end grip follows positive turn-in, the M135i's steering providing directness and meatiness. If only it provided more actual feedback to the driver, while there's a lack of absolute precision around the straight-ahead position and tugging at the steering wheel you won't experience in an A35 ... Or a BMW M240i coupe (still rear-drive and set to stay that way).

And while the M135i instils plenty of confidence on a winding road, the chassis can be slightly -- if not disconcertingly -- ruffled by bumps mid-corner or under braking.

With a test car not yet available with the adaptive dampers and 18-inch wheels, we're left itching to know whether they would improve both the ride and handling of BMW's sportiest hatchback.

The passive M Sport suspension and 19-inch wheel combination is firm, as you would expect, though the ride is busier and noisier than rival set-ups.

If the M135i struggles to charm keen drivers like the M140i did, owners -- and rear passengers -- will appreciate the significant progress in interior space and presentation. Despite the new 1 Series being 5mm shorter, rear leg room has increased by 33mm courtesy of the new platform shared with Mini. A 34mm-wider body also improves elbow room front and rear, and a 13mm lift in body height creates some extra head room.

While the rear doors could open wider for easier ingress/egress, adults will be far happier once ensconced in the back seat than the previous 1 Series. Taller passengers will just find the optional panoramic sunroof can encroach on head room.

Rear passengers would also prefer an armrest to be standard, we suspect, but they get ventilation, USB ports, and good forward vision thanks to the narrow, integrated front headrests.

Up front, the M Sport seats feature cushion extensions and electric adjustment with memory function for the driver, so it's easy to get yourself comfortable. They contribute to excellent ergonomics all round, including the conveniently angled window switches and stubby gearshift lever. The chubby M steering wheel, continuing BMW's fascination with thick rims for its sportiest models, is more polarising.

We're not fans of the separate Eco/Comfort/Sport buttons, either -- the former toggle switch was much easier for changing modes on the fly -- and now you find yourself looking down at the centre console.

There's a similarly edgy look to some of the 1 Series cabin's design as found in the 3 Series, with an assortment of textures and patterns working cohesively and complementing an overall lift in perceived quality, which means an M135i owner doesn't need to glance enviously at the interior of an Audi S3.

Aside from the sporty seats and steering wheel, an array of M badges or M brand colours are scattered around to help make it clear you're not in a 118i -- front mats, upper-seat piping, steering wheel and driver display, plus 'M135i' tread plates.

The digital instrument cluster could offer more configuration options, but adds to the 1 Series cabin's enhanced sophistication. The speedo and tacho 'dials' turn a suitably angry (and thicker) red when Sport mode is chosen.

Usefully sized door pockets and console cubby give the front cabin a good dose of practicality, and there's a wireless smartphone-charging tray (with padding protection as a nice extra touch). It doesn't accommodate larger phones, though.

Boot space is nearly 7cm wider than before, helping to boost luggage capacity by 20L to 380L. There's an automatic tailgate and the rear seats can be flattened on one side or in their entirety with a 60-40 split. If you get a puncture, your only saviour is a repair kit.

In managing to deliver similar performance to its predecessor, while being notably more practical (and higher in quality), the M135i xDrive can be considered a success.

The BMW is not without some dynamic merit, either, though for now we're left frustratingly intrigued about what improvement the optional adaptive dampers could bring to ride and handling.

A variable suspension, however, is unlikely to fix the M135i xDrive's lack of emotional connection with its driver. And without it, the fastest 1 Series is merely a decent hot hatch rather than a great one. 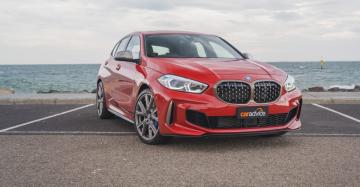