(first posted 2/26/2014) Picking up where I left off Monday , I'll begin the second installment of pictures from my visit to the '68 Chicago Auto Show with this concept, which previews many elements of the 1969 Mustang. Carryover butt: 1968 Chicago Auto Show

We revisited that car on Saturday and many of its styling elements are plainly visible here, combined with a spoiler reminiscent of the '68 Shelby's. Gurney Eagle open wheeler: 1968 Chicago Auto Show

Dan Gurney was building some beautiful open wheelers at that time. This is probably a USAC Indy car. The lack of chin spoilers and rear wings is refreshing, but would soon change. DeTomaso Mangusta -- Hasn't Aged A Bit! 1969 Chicago Auto Show

The DeTomaso Mangusta was beautiful then and remains so today. Nice ass! 1969 Chicago Auto Show

The Mangusta was designed by Giugiaro while he was at Ghia. 401 Mangustas were built from 1967-71. Mercury concept car: 1969 Chicago Auto Show

I'm not sure what the concept was (JPC, help me here): other than maybe to see how big a car could built that only accommodated two people, maybe four. Pearl paints were a big deal back in '69, but have long since ceased to be special. My wife's Forester has a pearl paint job. Man, when a Subaru comes with pearl paint as a no cost option you know it's not going to raise many eyebrows Wait, is that a Pontiac emblem on the nose? 1969 Chicago Auto Show

No, this is not a Stingray styling concept. It's a Pontiac Cirrus. It was a re-nosed 1964 GM-X Stiletto. LEDs? 1969 Chicago Auto Show

I don't think LED headlights were even a concept in 1969, although they were invented by Oleg Losev in the USSR in 1927. This would look right in place in a current Audi showroom. 1968 Buick Riviera, 1968 Chicago Auto Show

I'm not sure why I shot this Riviera, maybe because of the high-zoot orange paint job. The whitewalls aren't show car specials, you can find them in the 1968 Riviera brochure.

More to come on Friday. 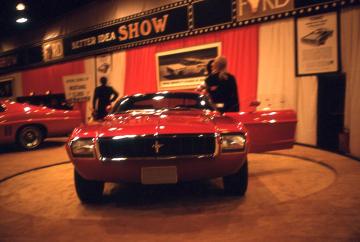