I had always imagined the 275 Trophy-R was the high point of the really hot Renault Mégane model series. I'm not sure why but I remembered it as the high watermark. With its coupé-ish appearance and rock-rigid body, it seemed as modern as today's Mégane does, but with less than 300bhp, it retained the delicacy of old hot hatchbacks.

It's also the only one I drove at the Nürburgring, the track that has made this series of special Renault Sport Méganes famous, because each of the trio set a new lap record for a front-driven production car. That's not any guarantee of greatness, of course, but it helped here, and I always felt that the 275 Trophy-R was the standout among a series of standout cars. Today, though, will tell. We have the three cars in the series together in the same place at the same time. It's a sequence that started in 2008 with a car called the R26R , or R26.R in Renault-speak of the sort that led to the Kia cee'd becoming the Ceed by the time it had passed via sensible sub-editors.

There had been hot Renaults before the R26R. The most bonkers Clio ever had a V6 installed in its middle; there's an amusing 'three-litre Clio' story involving a confused Volkswagen chief, Ferdinand Piëch, attached to that. And even before that, there were Group B rallying-homologated, mid-engined Renault 5 specials. But the R26R had a different kind of competition in mind and went about succeeding at it in a different way. Renault wanted the Mégane to become the fastest front-wheel-drive production car around the Nordschleife -- a feat that, remember, doesn't necessarily make for a great driver's car -- so set about throwing 123kg from an already light hatchback, including ditching the rear seats and swapping rear window and tailgate glass for plastic. Thus equipped and riding on optional Toyo track tyres, Renault's tame test driver Vincent Bayle took the R26R around the 'Ring in just 8min 17sec. 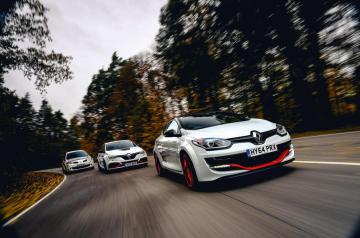