When picturing a modern sports car, you might imagine anything from a lightweight track car or a modern hot hatchback to a mid-engined two-seater or a front-engined grand touring coupé.

For the purposes of this top 10 chart, however, we can narrow our terms of reference down a bit: Caterham Sevens , Ferrari 488s , Alpine A110s and BMW M cars are ranked and dealt with elsewhere. Here, we're interested in full-sized, fulsomely endowed, dedicated sports cars priced between about £60,000 and £120,000. Only grown-up, big-hitting, multifaceted and purpose-built options get in.

Front, mid and rear-engined offerings are included, likewise rear-wheel-drive and four-wheel-drive layouts, open and closed cockpits and both simple petrol and hybrid powertrains. There are plenty of routes towards the level of indulgent performance, vivid handling poise, immersive driver engagement and character you'd expect of a true sports car, after all. But which should you take -- and why?

So far, we've driven the new 992 generation of the Porsche 911 in both rear-drive Carrera S and four-wheel-drive Carrera 4S guises. Both tests suggested that this eighth-generation, rear-engined sporting hero is every inch as great a driver's car as the 991 it has replaced -- and, if anything, stands ready to take the game further away from its rivals.

Having grown longer and slightly wider, the 911 is available in 380bhp Carrera and 444bhp Carrera S forms. Both are twin-turbocharged and, for now, come with eight-speed automatic gearboxes. Manual examples are expected to arrive in the UK in early 2021.

Both versions use what used to be called the 911's 'widebody' shell (which has been lightened by more extensive use of aluminium in its construction), while four-wheel steering is now an option even on non-GT-level cars and mixed-width wheels and tyres come as standard. 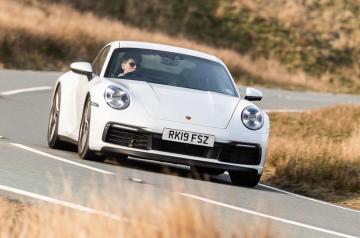