Not content to just reveal the upcoming Ford Bronco Sport and be done with it, the shadowy denizens of Deepest Darkest Internet decided to spring an even bigger surprise on us today: the actual 2021 Bronco.

Body-on-frame and sporting a removable roof, the returning Bronco will be offered with two or four doors and a brace of turbocharged engines.

Someone with a pretty blurry (and perhaps quite vintage) camera phone snapped this pic of a four-door model, which then found its way to fullsizebronco.com . The model's bumper is a real, solid affair, its tires look ready to bite into the roughest of surfaces, and its roof is of the soft, fold-down variety.

From this angle, we can't confirm if the windshield frame is hinged and thus able to fold down. The doors boast no exterior hinges with which to facilitate quick removal, but that doesn't mean Ford intends them to remain fixed. There's been plenty of online talk (and patents) to suggest otherwise. One of those patents suggests the side pillars will come off with the roof, not the doors. The hardtop itself is said to be capable of removal in segments, and spy shots of a two-door model prove it.

There isn't long to wait before Ford spills all of the model's secrets. Bronco is reportedly due for a reveal later this month before going on sale early next year.

Unlike in some camouflaged spy shots from a while back, the production-ready Bronco seen above sports aggressive fender flares that would have been hard to hide beneath a tight dress. They could be part of an equipment package or an especially rugged trim.

Like the smaller, unibody Bronco Sport, the pair's bigger brother also advertises itself via its grille. In this case, it seems Ford has employed LED light bars not just to encircle the round, retro lamps and brighten the grille crossbar, but to shout the Bronco's presence to all around. Jeep Wrangler lovers have their slots; Bronco fans have a billboard.

Two engines will be on offer, sources tell TTAC. The base offering is the potent 2.3-liter Ecoboost four-cylinder found in the Ranger pickup, from which the Bronco borrows its frame. That engine can apparently be had with a seven-speed manual or 10-speed automatic. We're told an uplevel 2.7-liter Ecoboost V6 will also be on offer, though that mill pairs only with the autobox. Bummer!

After that, there's no telling what Ford might insert beneath the Bronco's hood (the Wrangler's optional V6 diesel and upcoming hybrid variant makes it the more versatile of the two, powertrain-wise). 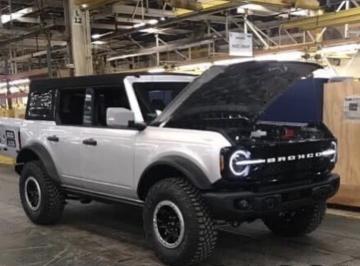