The title of Joseph Dennis' CC this morning obviously inspired this one. Cars are intrinsically a reflection of their time, but the various brands and models reflect the many facets of any given time. And while the convertible was just about to get a new lease on life with the LeBaron, just two years later the radically new Honda Civic "tall boy" wagon created a sensation in its own right. Nothing quite like it had existed before; at least in the US. The Germans would call it a raumwunder, a space or room miracle. And so it was.

If you want to know why I love my xB, it started right here: we had one of these, if only for about a year or so. It was Stephanie's car, and saddled with the three-speed automatic. It essentially replaced her Peugeot 404 wagon, which felt about twice as long. But I loved how tall and airy the cabin was in front; cranial real estate! A quality I have treasured ever since. Being 6'4″ will tend to enhance that appreciation. And the rear seat was crazy roomy too! Big enough for our two little ones in car/booster seats, and for Nana to sit in the middle.

Or I would sometimes sit in the back with them, just because...that's how I am.

Yeah, the cargo room behind the rear seat was a bit cozy, especially for the giant Italian twin stroller we had at the time. Somehow we made it fit. Took it on vacation. Blasted through Topanga Canyon flat out. Going up and going down. Well, maybe the down part is a slight exaggeration.

I've actually done a full CC on these here , so why repeat my love song to this brilliant little magic box? All I can say is that if I still had it, I'd probably still be driving it happily now; well, having converted it to stick shift after it became mine, that is. The xB is just a somewhat better version of one of these. 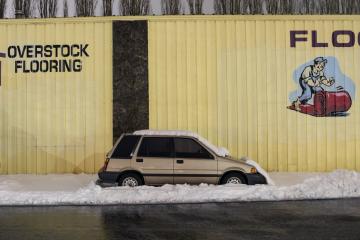