If you're a Porsche purist, this might be blasphemy in its purest sense. Yes, this is a genuine 964 RS that's been given an RAUH-Welt Begriff (RWB) backdate conversion. And on top of this transformation to make it look more like the original '70s RS, it's now sporting a modern aero package to help it perform at the track.

There are two ways to look at it: Either you find yourself consumed with anger by seeing one of the most sought after 964 models modified, or you just go with the flow and respect what the owner wanted to create. While you decide which camp you fit into, let's do a quick walk-around and check out the car I came across at Attack Tsukuba a couple of weekends ago in more detail.

I'm a big fan of the RWB backdate conversion for the 964 as I feel it transforms the car into such a pure and functional-looking 911. That's my opinion of course, but I like things simple. The way the broader fenders are blended in, and then extra sprinkle of aggression that Nakai-san really knows how to do, works so well here.

Backdates make up only a very small percentage of the RWBs that Nakai-san builds, but when you want to take a car to the track and shoot for serious lap times, balance and beauty linked to the past has to take a back seat to function.

That said, the addition and integration of the carbon fiber splitter to the RS-inspired front bumper has been done rather well.

It's the same story at the back. The GT wing sits high above the ducktail, looking like it's sprouted up from between the panel gaps.

Somehow it all comes together beautifully.

This particular build also features a stripped-out cabin and a modified 3.8L engine, making it such a special car that I think we need to take a closer look with a dedicated feature.

Aragosta dampers and huge Brembo brakes ensure the 964 can take full advantage of the mechanical and aero-induced grip it now produces.

And it's obviously working too, as the owner was able to extract a 59.305-second lap out of the car in less than perfect conditions. That's extremely quick for a car of this spec.

This is without a doubt one of the most interesting RWB builds we've ever seen from Nakai-san. Now I just can't wait to see it slowly evolve and improve, and hopefully break through the 58-second barrier. 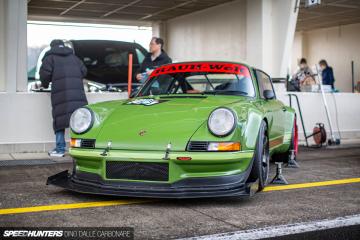