When Nissan unveiled the Ariya concept electric vehicle at the Toyota auto show last fall, it was coy about some things like when a production version might go on sale and how much such an EV would cost. On the other hand, it was open about others, such as that there was a lot of tech hidden in the all-electric SUV.

As we get closer to actually seeing a Nissan electric SUV available for sale, Nissan is revealing more details about the Ariya. Today, that means information about the EV's unusual grille in the front fascia, which Nissan is calling a "shield."

Credit where credit's due: that's a clever name. You kind of have to open your imagination to picture holding part of the Ariya's front end on your arm, but the darker area that would be a grille on a gasoline-engined vehicle could certainly be used to block a weapon if needed. Here, that darker area is used to protect the car and its occupants by hiding a number of safety sensors that can see through the polycarbonate material. A Nissan spokesperson told Car and Driver that the shield hides the same "suite of sensors and hardware for the ProPilot 2.0 system that is already in use in the Skyline in Japan," so that means sensors for front-facing radar, sonar, and an Around View Monitor camera.

Nissan designers and engineers took the time to develop a number of versions of the shield to make sure these sensors actually work through the material used on the concept car. All of these tests mean that Nissan could implement a grille like this on a Skyline and the ProPilot functions would work.

Except Nissan couldn't, unless it made an all-electric version of the Skyline. That's because the fact that the Ariya is an EV gave the designers free rein to develop a front end that didn't look like other cars on the road. With no fossil-fuel-powered engine under the hood, there's no need for an open grille to let cool air in. Nissan said in a statement that as more and more electric vehicles come to market, "new opportunities are opening up to reinvent the ways we construct and shape cars." While the Nissan Leaf, Tesla EVs, and the Ford Mustang Mach-E (among other EVs) have all developed their own takes on a sealed grille, the Ariya is different.

The polycarbonate used in the Ariya's shield is the same as what's used in the headlights, just opaque, with some metallic flakes in the paint to create the distinctive kumikopattern (kumiko is a Japanese term for a woodworking technique that makes a pattern) that fits within the company's Timeless Japanese Futurism design language. Nissan designers have compared the look of the Ariya shield to a "sheet of silent water" with a still pattern underneath.

With Nissan talking about the Ariya a few months after its debut and saying the concept is "rooted in a near-future reality," we look forward to getting more information before, finally, getting behind the wheel for real. 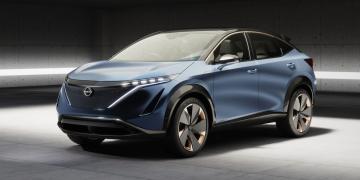