Back in November, Prodrive, the Oxfordshire-based motorsport specialist behind Subaru's World Rally Championship outfit from 1990 to 2008, Aston Martin's World Endurance Championship campaign, and the Formula 1 BAR team from 2002 to 2004, launched ' Prodrive Legends ', a program designed to "meticulously and faithfully restore" the team's ex-works cars to their original glory.

The first model chosen to receive the Legends treatment was a Subaru Impreza WRC2004 used by 2003 World Rally Champion, Petter Solberg. Specifically chassis #008, which finished 3 ^rd^ on its maiden outing in Turkey before winning that year's Rally Japan.

Having stripped the Subaru to its bare chassis, the restoration process also include a full strip and rebuild of the boxer flat-four to both zero mileage and period performance specifications. In WRC trim, the 'EJ207' is said to have produced 300hp and up to 589Nm (434lb ft) of torque.

Similarly, the six-speed semi-automatic gearbox that was mated to the flat-four has also/will be stripped and rebuilt to zero mileage, undergoing dyno tests before being remounted to chassis #008. The chassis meanwhile, fresh from an acid bath treatment, has been repainted in the original Subaru blue before the drivetrain, fully restored interior componentry and body panels are replaced. It's a process similar to that used on the Impreza 555 driven by Chris Harris on an episode of Top Gear and with which Colin McRae secured the 1995 WRC crown .

Prodrive has confirmed that the reassembly phase is underway, and while a confirmed finish date has yet to be announced, the full project was expected to take only a few months.

Following its three-rally stint in 2004 with Subaru, which ended with a roll on that year's Rally Australia, WRC2004 chassis #008 was used as a privateer entry in the PWRC, the JWRC, and national rallies in Norway, Turkey and Italy up to and including 2009, taking seven class wins in the process. That was all she wrote until chassis #008 re-emerged with a new owner in 2016, competing intermittently in Ireland both that year and in 2017.

Alongside their Rally Japan win meanwhile, 2003 World Champion Solberg and co-driver Phil Mills collected four further wins in 2004 to finish the WRC season 2 ^nd^ overall in the standings to a certain Sébastien Loeb, taking another three wins to do so again the following year. Fittingly, Solberg's last WRC win, now aboard WRC2005, would be at that year's Rally Great Britain, the event at which he'd secured his loan WRC championship two years earlier and his very first WRC victory in 2002. Two World Rallycross Championships awaited the Norwegian legend in 2014 and 2015. 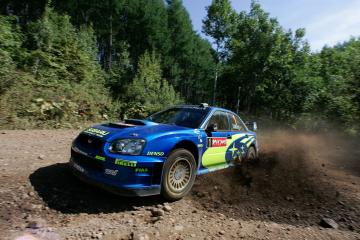