The Astro van gets a lot of love around here, and it's understandable. While it didn't make such a great genuine minivan, it sure made a terrific mid-sized van, a segment that's now under served. And to prove how versatile it was, here's two Astro RVs I spotted recently, with quite different approaches to the living quarters.

This Allegro motorhome is surprisingly large; sort of a domestic alternative to those Toyota 1 ton chassis motorhomes that were once so popular. I'm guessing the construction in the back had an emphasis on keeping the weight down, and it does not have a cab-over sleeper, so performance is probably not that bad. Just exactly how they lengthened the chassis is another question, as I assumed they were of at least semi-unitized construction. But that didn't stop the Dodge cutaway van from being lengthened considerably; stay tuned. This is actually a pretty nice rig. Not too big; not too small. Oops; it's actually a GMC Safari. Same difference. I didn't check the grille on this one so who knows; it might be a Safari too. But it's a lot more compact, with a pop top. More like an update on the old Toyota Chinook concept. I like the idea of pop-up roofs, but not the reality, as being that I'm tall, the idea of having to walk back there when the roof's not up is a turn off. But this makes a cute little camper. 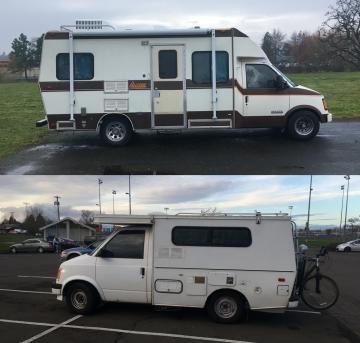