Eager to make a good impression with its first serious inductee in the wild world of electrification, Ford has released winter testing footage of the Mach-E crossover . While primarily an opportunity for the Blue Oval to show its pre-production prototypes drifting through a white background, Ford also wanted to take the opportunity to explain that the all-wheel drive variant has proven particularly popular among those placing preorders.

According to the manufacturer, reservations were strongest in California, Nevada, Colorado, Arizona and Washington. The Midwest also had elevated take rates, with snowier states opting for all-wheel drive three-quarters of the time. Ford said that ratio jumped to 9 in 10 pre-orders for areas like New England, proudly announced that reservations have finally been made in all 50 states. However, it stopped short of giving up the total number of orders placed, encouraging us to do some digging.

After combing through several auto forums, it seems the company locked in about 45,000 orders based on assigned reservation numbers. That's assuming Ford numbered the Mach-E sequentially --- at least 4,000 are presumed to be intended for corporate use and were set aside by the manufacturer before the order books officially opened. However, if interest remains steady through the summer, its plan to build 50,000 units in the first year won't be undone by a lack of demand.

The Mustang Mach-E starts at $43,895 (minus the available $7,500 federal tax incentive). That should make it a fairly appetizing item against the pricer alternatives coming out of Europe and California. Even if you're not sold on the styling, Ford appears to be offering one of the quickest and most affordable electric crossovers on the market (at least on paper). We're curious to see how it stacks up against the Jaguar I-Pace, Audi E-Tron, and Tesla Model X when deliveries begin this fall. 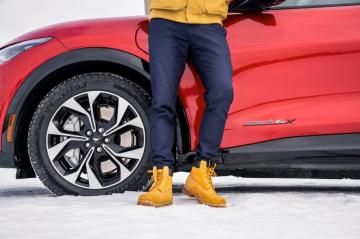