It is a universal truth that nothing good happens after 2:00 a.m. As a corollary, I maintain that nothing good happens on the last lap at a track, either. When you know it's your last lap of the day, you tend to get goofy. This is your final chance to experiment with late braking, early throttle, Scandinavian flicks, Mongolian slingshots, and Brazilian yo-yos. Some of those moves are so advanced, you might think I just made them up. But I executed the last one to perfection at Virginia International Raceway in the Kia Stinger GTS. Unfortunately, the Brazilian yo-yo is when you spin, slide halfway to the next state, and then meander into the tire wall. Nailed it.

I wish I could blame the car, but the big Kia was a blast at VIR. I love the Stinger GTS for its rear-biased all-wheel-drive system, its robust Brembo brakes, its supple bodywork. And I'd love a scapegoat, but up until then, the blinding-orange Stinger was, to use some technical jargon, ripping it real good.

Here is where I point out that over 20 years of doing this job, I've never been That Guy. My motto is "Nobody remembers the guy who went a little too slow, but everybody remembers the guy who went a little too fast." What's the point? Can you even tell me who won Le Mans last year? Your lap times at TrackRatz Track Dayz belong to a genre of accomplishment known as "personal bests," which is what you call achievements that nobody else cares about.

"I wish I could blame the car, but the big Kia was a blast at VIR. And I'd love a scapegoat, but up until then, the blinding-orange Stinger was, to use some technical jargon, ripping it real good."

At VIR, the Climbing Esses are an especially treacherous place to push the limits: a fast left-right-left-right sequence over a blind hill with precious little runoff. I've always been cautious in the esses because the consequences so outweigh the rewards. Last year, I had an instructor literally holding down my right leg on the throttle to coax me to go through faster. When I drove VIR in Ford Racing's simulator in Charlotte, their coach got on the radio to tell me to add throttle in the esses. Even driving an imaginary computer car, I was cautious.

That is, until the day I joined the That Guy Club. On my second-to-last lap, I went into the first right-hander at 117 mph. That felt pretty close to the sane limit. But on the last lap, doing last-lap things, I didn't really lift at the bottom of the hill. I went in at 124 mph and hit the turn at 124 mph---for reference, our Lightning Lap McLaren Senna did 144 mph there. Freeze-frame, cue Waylon Jennings: "Friends, do you think a Stinger can take the esses at remotely near the same speed as the Senna?"

There's a simple explanation for what happened next. I was going too fast. I went onto the corner curbing, same as every lap, but the extra speed upset the suspension and the car skipped left. Boom! Spin! No time to think. Thankfully, my line kept the car on pavement until the very top, when it slid onto the grass at 11 mph and then violated the laws of physics by accelerating toward the tire wall, which possibly contains powerful magnets. Oof. No airbags deployed, no glass shattered, the car drove fine. Maybe everything was fine? I finished the lap and pitted. Where I discovered . . . oh yeah, lots of dents.

Other drivers were surprisingly magnanimous. I expected raw schadenfreude but got empathy instead. "I just got my car back after hitting the wall at Turn 3," said a guy glumly appraising the Stinger. "Yesterday, someone totaled a GT3 here," he added. "An instructor." Misery, meet company. I still felt like what the French call a chapeau de derrière. The fortune cookie I opened later that night read, "An idea seriously contemplated tends to become a reality." You mean like crashing in the Climbing Esses? Great. On top of everything else, I've got to worry about a psychic warlock working in a fortune-cookie factory. 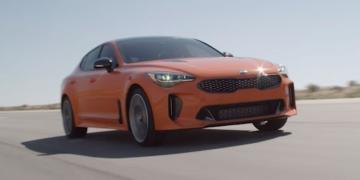