In A-Class of its own: Revisiting the original Mercedes A-Class

"As an innovation, no mass-produced car launched in the past 20 years can get near it" The A140 is a mite on the roads - it has even a Ford Fiesta licked for leanness Classic is a frills-free trim A140: every time he spies the name, Frankel's heart soars Frankel says the cabin is better assembled than is often credited Mercedes A-Class - interior No Mk1 A140 will ever be fast or engaging to drive, but it will provide more rear leg room than a contemporary Jaguar XJ saloon Boot is very roomy, given the car's footprint A-Class's engine will slide back and under the cabin in a collision R130 ONH was our 4337th road test victim back in 1997 Original A-Class was flipped avoiding an imaginary elk. Fortunately, there are no phantoms on these roads Mercedes A-Class - tracking front Mercedes A-Class - tracking side This car has had two owners from new: Mercedes and Frankel

It was so easy. The A-Class was short yet spacious, small yet strong. And if I bought a poverty-spec model that had just come off the Mercedes-Benz press fleet, having spent the first 10,000 miles of its life being thrashed to death by, well, people like me, I could just about afford one, too.

Which is how R130 ONH came into our lives. To be honest, I wasn't very excited about its arrival. I wasn't as down on the ride and handling as some of my colleagues, but it looked a long way from cool, was pretty slow, and although I'll fly in the face of popular opinion and say it was quite well put together by class standards, some of the materials chosen weren't very Benz . At all.

But by then, I'd not realised what miracles these cars are. Okay, I'd been told that in packaging terms, they were the cleverest things to come to market since the original Mini ; and I'd learned about the sandwich construction and the way the engine is slung almost under the car and how it absorbs almost all the force in a frontal impact by sliding backwards beneath you; but I'd not really studied the benefits because, until I bought one, I'd not really needed to.

It didn't take long. At the time, I had a Jaguar XJR saloon long-term test car, which was full to the gunwales with everything we needed for a weekend away in Wales until, at the very last moment and for reasons I can no longer recall, we had to take the A-Class. I can remember thinking that if we could fit half an XJ's worth of kit on board, I'd be pleased. In fact, it swallowed the lot with space to spare. And provided more rear leg room. The A140 is a little over 3.5 metres long. The XJ? A nice, round five metres.

But there's more. The A140's rear seats not only folded as you'd expect, but they could also be individually slid fore and aft, reclined or removed. As could the front passenger seat, which would therefore turn the A-Class into a single-seater. This car, which is less than the length of your thumb longer than a Volkswagen Up could, if you so chose, do a perfectly passable impression of a small van.

This is what you think about when you drive it. It doesn't have to have the dynamic prowess of a Caterham Seven or even a Volkswagen Golf GTI for it to be a great car. When lists of the world's greatest cars are drawn up, the Citroën DS always pops up somewhere but not, believe me, because of the way it drove: it was slow, cumbersome and dull. But it was innovative and beautiful and that was enough. Now, I concede the A-Class can't even play the prettiness card, but as an innovation, no mass-produced car launched in the past 20 years can get near it. Indeed, extend the trawl to the past 60 years and I would indeed put it up there with the original Mini. 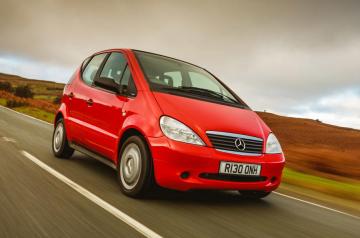