Curbside Outtake: A Chevy Blazer (K5) in the Blazing Sunshine

We've had a lot more sunshine that usual this winter, which is a mixed blessing. I actually prefer shooting cars under the sof cover of an overcast, but you take what you get. And in this case, it's a nicely-preserved big Blazer, a vehicle that has a following, but its numbers are obviously shrinking. This one is likely to be around for a while yet. I'll let you pin down the year as best as possible, but obviously it's pretty late in its almost twenty-year lifespan. Among other things, I hate having my shadow in the shots on sunny days, but sometimes it's almost impossible. I'm saluting this fine old veteran. 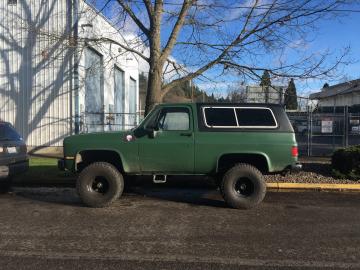