robadr posted some pictures shot at the beach in Zipolite, Mexico. This is quite the three-some, here, although VW "vochos" are hardly unusual. Not surprisingly, that truck with living quarters in back is what caught my eye. Let's take a closer look.

It's a Mitsubishi of some sort. And it has a double cab. But just exactly what the rear part was before being converted is not perfectly obvious. Maybe some sort of utility van or such. And the two big "visors" are unusual. They appear to be rigidly mounted, and if I had to guess, the lower one is a stone shield to protect the big windshield, given that this rig undoubtedly sees a lot of unpaved roads. It's got plates from both Belize and British Columbia. A serious snowbird; or rainbird, in the case of BC. And here he is; looks like he's gluing something. Yes, this is a rolling man cave, not some dainty little camper for a two-some. 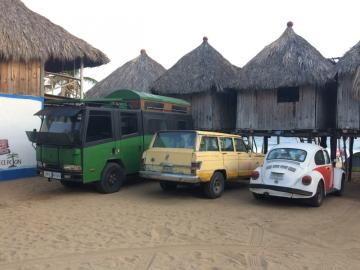