The banks of computers inside -- big screens, gentle heat, lots of whirring -- tell you it is. This is a place with a lot of processing and brain power.

And if you're not watching Realtime's stuff on the BBC's War of the Worlds or in games your kids know if you don't (Grid, Everwild, Game of Thrones and Jurassic World franchises), and you happen to have two million quid to drop on a car, Realtime will help Lotus sell you one.

Not that you'd know. Realtime has made the world's most advanced car configurator but the idea is that a bod from Lotus shows up with a hugely powerful laptop -- the sort that runs games with ease -- to "a table, office, or wherever high-networth individuals hang out", says Alan Holroyd, Lotus's digital marketing manager, and talks them through specifying an Evija electric hypercar .

The Evija is not the kind of car Lotus has made before. Not just because of the price, but also because its electric 1973bhp will make it the most powerful production car in the world when builds start in a few months.

Between now and the last of 130 Evijas being constructed , perhaps half a dozen computers running Realtime's configurator will tour the world. "The car should be configured in a convenient environment, almost definitely not a dealer environment," says McSweeney.

"It needed to be portable and touchscreen," agrees Holroyd, "and show the Evija appropriately -- and represent the technological leap."

It looks, on a high-resolution screen in front of me, like it does. The virtual Evija is sitting in a virtual studio, a digital recreation of Lotus's own design studio in Hethel, Norfolk.

"Why not go behind the secret curtain at Hethel?" says McSweeney. "This is the studio environment. But while every company will invest in a configurator, it shows one environment in most cases. We want to show how different a yellow can look in the desert, or in western Europe, or in a studio, so a customer doesn't take delivery and say 'this is not the colour I ordered' -- which does happen."

A couple of swipes of the screen, then, and the car is sitting next to some palm trees and sand with warm sunshine on it, while a couple more prods later, it's in the sort of spot Autocar would shoot a car in the autumn -- and its body colour looks a bit different each time. 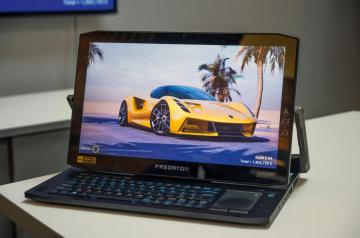