One in every five new vehicles sold in Australia so far is a medium SUV, making it by far the most popular new-vehicle segment. It's competitive as well, however. According to the VFACTS numbers, there are no less than 23 different models in the segment to choose from.

Aside from a facelift in 2017, the third-generation Nissan X-Trail has been soldering on since 2013. Normally when a model is reaching the end of its life, sales start to stagnate, but this X-Trail has remained strong. How so? Let's have a look.

We've got the new specification of the X-Trail on test here: the 2020 Nissan X-Trail N-Trek. It's based on the mid-range ST-L, but adds 19-inch alloys, eight-speaker Bose sound system, and a few basic accessories like wind deflectors and bonnet protector on the outside, and carpet and kick plates on the inside. For this extra gear, Nissan has bumped up the asking price by a neat $1000.

That makes the X-Trail N-Trek 2WD a $38,700 propositionbefore on-road costs. So, while it's not the cheapest option on the market, the X-Trail does make up with some decent standard kit.

It's also a strong performer in terms of safety. There's autonomous emergency braking across the range, and this specification benefits from blind-spot monitoring and rear cross-traffic alert. There's also a 360-degree camera system, which includes moving-object detection.

One big advantage of the X-Trail is its overall size. It's one of the biggest in its class overall, with 4.69m of length and 1.82m of width yielding good cabin space. Our tester is a five-seater, but you can opt for seven pews in some specifications.

Most noticeably, the second row is amply spacious. There's plenty of leg room and head room on offer, with tilting and sliding seats that add to the versatility. While air vents are welcome, passengers might baulk at no USB or 12V power available.

Behind that second row is 565L of storage space, one of the better in the segment. Wheel arches don't impinge on useable space too much, and there is some extra room for storage under the false floor.

The interior is feeling those seven years, however, despite a couple of small updates. There are other medium SUVs out there with a more modern, contemporary take, leaving the X-Trail feeling dated.

The new steering wheel, which came in back in 2017, does help lift the feeling of stodginess. Perhaps Nissan should consider a similar update for its Navara as well.

The infotainment is dated, and gets by without Apple CarPlay or Android Auto. There is navigation with traffic updates, but it feels particularly over-the-hill in usage.

Otherwise, the X-Trail is plenty comfortable for driver and front passenger. There's height and reach adjustment for the steering wheel, and six-way electric adjustment (with lumbar control) for the driver's seat. The centre console is well sized, as are the door bins and cupholders. All practical stuff, although the hard plastics around the dashboard, do and centre console won't be to everybody's tastes.

This specification of X-Trail is powered by a 2.5-litre, four-cylinder petrol engine , which makes 126kW at 6000rpm and 226Nm at 4400rpm. Not scintillating figures, I'm sure you'll agree. However, they paint a worse picture than in practice. Around town, through traffic and other typical suburban settings, the X-Trail is sprightly enough to not feel lethargic.

You start to notice a lack of urgency when you pull closer to highway speeds. The engine starts working hard for progress at this stage, and is let down by a whining CVT automatic gearbox. It's certainly not a powertrain built to delight the enthusiast, but it's able enough for the X-Trail's chief toils.

Around town, it's quiet and refined. Pile on the speed and acceleration, and you start to notice some road and engine noise coming into the cabin. It's noticeable, and worse than others in the segment.

The ride is well dialled in, favouring comfort without feeling overly bouncy. Steering is similarly light for ease of use, letting the X-Trail feel mostly painless around town. The turning circle of 11.3m is good enough for most manoeuvres.

Slurping 91RON, the 2.5-litre powertrain returns a claimed 8.3L/100km on the combined cycle. That creeps up to 11.3L/100km on the urban cycle, which is a closer indicator of where the X-Trail will likely be driven.

The X-Trail is covered by Nissan's five-year/unlimited-kilometre warranty, which is standard fare for the competition. This includes five years' worth of roadside assist.

Although it's one of the biggest, the X-Trail is also one of the oldest. You don't need to look far in that huge throng of competition to find something newer, with more tech or more modern styling. With that aside, however, the X-Trail is still worthy of consideration. It's let down by highway noise and sluggish rolling acceleration, although its performance is good enough around town. No Apple CarPlay or Android Auto is a blight from a mostly underwhelming infotainment system.

Whether the upgrades to this N-Trek specification are worth the $1000 asking price, I'll leave that up to the reader. Bigger wheels do make a decent aesthetic change, and the upgraded sound system makes a difference.

Otherwise, the base bones of the X-Trail are good ones. It's not a segment leader anywhere but size, but is still an option worth looking at depending on how good the deal is. 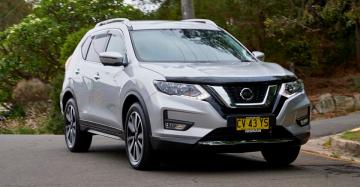