How to build the ultimate value campervan

I recently spent a week kite-surfing in Sicily. Needless to say, I was about the oldest person at the kite-surfing centre and was surrounded by incredibly fit and healthy looking youngsters.

Actually, they looked a lot like the people I see in the videos that we're shown during the press conference at the launch of a new SUV or crossover. I'm not sure I have too many of these events left in me. If it's not a load of twaddle about how fast the latest SUV is around the Nürburgring, it's a fantasy land of young people buying £35,000 crossovers. Youngsters who are most likely either saddled with student debt or haven't actually got around to learning to drive.

The kite-surfing beautiful people in Sicily did have vehicles, as do those I've seen in Cornwall and North Devon. More accurately, not cars but vans. Either they have old Volkswagen Californias or other conversions such as Devons or a van they've converted themselves. Or possibly a works van they're allowed to use on the weekend. I also went climbing in the Lake District and in the Alps last year and it was the same story: vans everywhere. So Hyundai, Kia, Toyota and everyone else who's been selling me the dream of young windswept and interesting people buying your vehicles -- sorry, they don't.

But they might buy the vehicle that Autocar's Ben Summerell-Youde and I have been busy creating. Ben is extremely talented with the crayons, young and, most importantly, has what my friends in the car company marketing departments refer to as a 'young active lifestyle'. He is also the owner of a VW T3 Multivan Syncro.

Our plan is remarkably simple: we are going to do a Dacia. Literally. We're going to take the current Renault Trafic, which was launched in 2014 and will presumably be replaced or at least facelifted fairly soon, and turn it into a Dacia campervan. Just as Renault does with theDacia Duster and Sandero, we'll be fitting powertrains that will meet current and impending emissions regulations but that might not be state-of-the-art or to the highest specification in power or sophistication. Our customers won't mind because they'll be coming from old clunkers. Something that has a long warranty and is brand new will be thrilling enough. 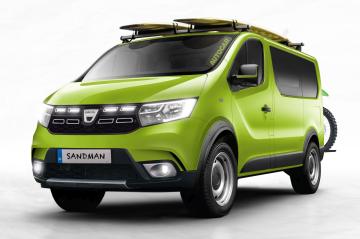