Earlier this month a coworker and I made a road trip in my assigned, employer owned 2018 Chevrolet Impala. This trip is where the sparkle faded, the new smell went away, the bloom fell off the rose, or some such applicable euphemism. But the aggravation is not from what you might initially think.

For reference, the Impala has right at 27,000 miles as of this writing. We made a trip from Jefferson City to the town of Salem, taking the blue route seen here. With a population of nearly 5,000 Salem is perhaps best known for its proximity to Montauk State Park, that mecca of trout fishing for a sizable part of what seems like the planet.

After leaving Salem we were meandering up Route 19 in a northeasterly direction. Route 19 isn't overly scenic but is highly representative of roads in the south-central part of the state -- hilly and curvy. Somewhere around the line between Dent and Crawford Counties, we heard a metallic "clang" followed by rushing air. The conversation was something along the lines of...

Coworker: What the hell was that? A tire?

Me: Yes. It's driving just fine.

Coworker: So you know what it is?

Me: I have a pretty strong hunch.

After pulling into a county road, I hit the trunk release button next to the steering column. White dust rolled out of the trunk as the lid sprung open. This is what we saw, which confirmed my hunch. The fire extinguisher had discharged.

How or why I do not know, but it did.

Having to report the incident, I called the fleet manager upon arrival at my employer's facility in Steelville. I started off the conversation asking what our practices and general direction was in mounting fire extinguishers in light duty vehicles. He said it had been a consideration but nothing had been resolved. He said the construct of the trunks of passenger cars and some C/SUVs wasn't overly conducive for finding anything solid for mounting the holding brackets given the cardboard spare tire covers and carpeted walls in the trunks of passenger cars and some C/SUVs.

When he asked why I was curious I told him. His response was an "oh, shit" with my assuring him I was not upset but very glad this happened in the contained trunk of a sedan, not the open area of a C/SUV. We talked about it more, with his later doing some more intensive research into mounting options.

After visiting with some coworkers at Steelville I wheeled the Impala into one of the bays so the mess could be vacuumed. That fire extinguisher did its job but just in the wrong place. Everything except the boots and ice scraper went into the trash.

I made a gross error when parking the Impala in the bay. In order to hear the spotter as I was backing up from my outside parking space, I had rolled down the front windows, inadvertently leaving them down. The exhaust of the two shop vacuums blew out half as much dust as they ingested, creating an immediate and rolling dust cloud that went straight for the open windows.

Regrouping, I backed the Impala outside. There was enough dust on the car for a crime scene -- every fingerprint on the surface was highly identifiable. Mess finally under control, we left for our return trip to Jefferson City, opting to stay on Route 19 to US 50, the route seen furthest to the east.

On the south side of Cuba there is a railroad overpass. Approaching the overpass I noticed there was a train going overhead. As we went under the overpass there was a load "BAM!" that sounded like a shotgun blast inside the car.

A chunk of concrete hit the windshield, nearly penetrating the glass. Thankfully it was down low near the dashboard so my line of sight wasn't compromised.

I pulled over to call the fleet manager a second time.

Thus my question of the day: What has been your most aggravating road trip? Nothing here was the fault of General Motors but rather just freaks of nature.

A postscript: With the current virulent events in the world, I am working from home but have the Impala parked at the house. With employee interviews an hour away last Thursday, I was leaving at a rainy 7 am only to discover a flat tire. Help showed up to give me a different vehicle (a 2015 Dodge Grand Caravan in this lip-smacking color) and to take the Impala to have the tire repaired.

Not only had I picked up a sharp rock but I had also collected a few nails. Such is life.

Start the ball rolling by posting a comment on this article! 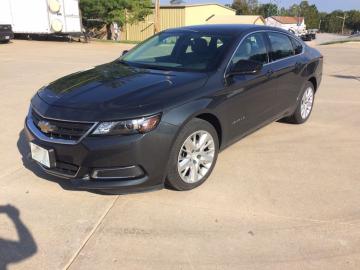