I'm not sure what you think, but I feel like Top Secret has been a little absent from the Japanese tuning scene for quite a few years now. Sure, they've still been building cars, looking after their loyal customers and maintaining a physical presence at events, but that's not the Top Secret I remember.

For a long time, Kazuhiko 'Smoky' Nagata was a mad scientist, engineering wild Wangan -destroying creations from his Chiba-based workshop. I'd often find myself there, checking out builds like the V35 Skyline GT-R, VQ35-powered R32, and of course the Century V12-powered JZA80 Supra. The experimentation and mindless pursuit of power and speed continues, but I've missed the uniqueness of those Nagata specials.

There's nothing crazy about it this build. It's not over the top in any way, as you would expect a Top Secret creation to be. But there's something special about it.

It's really nice to see Top Secret playing around with an older car, and the C210 -- perhaps the least popular Skyline chassis -- especially.

But Nagata-san once again approached this build from a 'what if?' perspective. Specifically, what if in the late '70s, Nissan had made a GT-R variant of the C210?

There was no way that the S20 2.0-liter straight-six that had powered the previous model GT-Rs would have sufficed in this era. Even if the decade-away RB26 was the obvious choice for Nagata and his team, to fit in with the vintage of the car it made more sense to go naturally aspirated. In this case it's one running an RB30 bottom end for a bump in power and torque.

With just under 300hp on tap, it gives the 'Skyline Japan' -- as this generation is often referred as -- a definite fun factor, and thanks to the row of open velocity stacks the sound must be glorious.

The cabin has been kept simple, far more so than any Top Secret demo car we've seen in the past. There's no obtrusive JDM bolt-in roll cage and an F16 jet fighter array of auxiliary dials, just a seat swap and a Top Secret Personal steering wheel pulled from their circa 2001 catalogue.

Hakosuka -inspired and body-color-matched fender flares drop over Star Road Glow Star wheels for that perfect restomod feel. This is the stuff we want to see out of Top Secret again. Is anyone else with me? 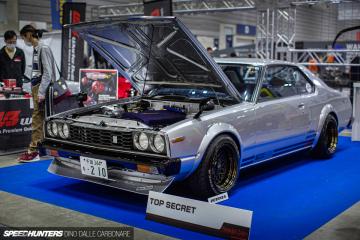