(first posted 4/21/2014) Coming from image-conscious suburbs, it's still a surprise each time I see cars like this in daily use (in this part of the country, at least). Unless you're a compulsive shopper or really into new fads, though, it's perfectly sane to keep an old pal like this 1980 (or 81) Civic around. After all, why throw your baby away when you don't have to?

The owner of this lovely machine certainly couldn't tell you, but could likely make a convincing case as to why someone would want to keep either their infant or old car around. After all, arguments are more convincing when they come from those who practice what they preach. I honestly had no clue that abandoned neonates were a common enough phenomenon in this day and age to merit the printing of bumper stickers. It's certainly was not one of the pre-natal health and social issues I was taught about in nursing school, but I guess the few occurrences which take place are sobering enough. Besides, "Drink OJ For Healthy Neural Tube Development" isn't quite as compelling.

Introduced partway through the first generation's long run, the five-door wagon body style was part of the second generation lineup from the beginning. Not as innovative as the car it replaced, and now competing with a host of front-drive rivals, Honda worked on increasing passenger space more than anything else. The biggest Civic, obviously, was the wagon which, with a 91.3 inch wheelbase and leaf-sprung dead beam, was the best expression of Honda's goals for the new model. It clearly sold well, because they've always made up a good portion of the few second generation Civics I see.

Perhaps it's because they were such a great way for parents to transport their big babies around. Buying a car like this for family use back in 1980 was a shrewd investment, especially if the new three-speed, fully automatic transmission was avoided. Honda was well aware of the new Civic's newfound space (all things being relative) and also introduced a four-door sedan, but because of its traditional trunk and comparatively bulky rear strut suspension, young families were particularly well served by the long roof variant. The round headlights identify a pre-facelift model, meaning its 1.5 liter CVCC engine either makes sixty-three horsepower at 5000 rpm or, if it's a 1980, only fifty-two. With a full load and A/C, you'd definitely want the five-speed to wring out all the available power, but with less than 2,000 pounds to push around, an aggressive driver could thread through today's traffic confidently. At any rate, this car is still good enough to tool around on Bloomington's surprisingly congested streets in 2014.

With a stereo and the brand's excellent HVAC, its driver would also be comfortable doing so. And while it looks like the seats are pretty tattered underneath their threadbare covers, the surrounding plastics have survived without any cracks and over three decades later, the quality is still evident. By the early '80s, Japanese economy cars were becoming genuinely user-friendly and this second-gen Civic's interior is an excellent example, leading the way with a design very different from that of the car it replaced and more modern than those of the Toyotas and Datsuns it did battle with (and don't even mention the Westmoreland Rabbits). All Civics' interiors up until the 1996 model followed through with updated, improved variations on this theme.

Aside from mechanical integrity and ergonomic superiority, the Civic wagon's popularity can also be explained by the lack of very direct competition. The Corolla was still rear-drive at this point, and ever so slightly larger, as was the 323/GLC wagon. The Escort wagon was quite a bit bigger, and the Sentra, which didn't arrive until 1982, was also larger. The Subaru DL wagon was perhaps its closest rival, and as a child in upstate NY, I saw a bit more of those cars, but as the cheapest model in a more expensive range, it was also upmarket compared to Honda's little wagon. While by the end of the second generation's run in 1983, rivals were finally nipping at the Civic's heels, Honda had a real trick up its sleeve with a mature successor which showed the second-generation car to be the product of 1970s thinking that it was. That makes this wagon one of the last of Honda's babies.

Attach an image (JPEG only)

Notify me of follow-up comments by email. 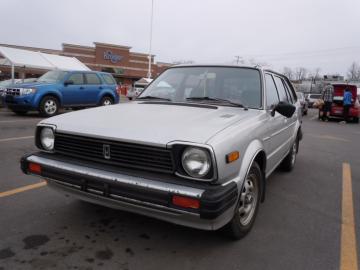