A UK firm has invented a bolt-on exhaust system that make electric cars sound like a V8, V10 or V12.

Did you crave the performance of a Tesla electric car but miss the sound of a rumbling V8? A UK exhaust manufacturer may have the answer: fake external noise.

The Milltek exhaust company has invented a muffler that has a built-in speaker to emit a fake but realistic V8 noise -- or one of a number of high performance sounds that can be selected via a smartphone app.

The noise gets louder as the otherwise silent electric car in driven faster or accelerates harder.

The hi-tech fake exhaust -- which costs the equivalent of about $2400 -- was shown at last year's SEMA auto show in Las Vegas, but now the first examples have begun to hit the street.

Below is a short video of a demonstration unit connected to an iPad and an accelerator pedal at the 2019 SEMA auto show.

Now one UK owner has fitted a pair of fake exhausts to his Tesla Model 3 electric car. It's in this video review here, although the presenter and the car owner take a while to get to the point.

If you start watching the video from about the five-minute mark you'll be able to cut to the chase and see it in action on a real car.

The silence of electric cars -- and their increasing presence on our roads -- has become a serious issue for pedestrians and visually impaired persons.

Authorities in Europe, the US and Japan are drafting policies to compel electric cars to emit a warning sound -- similar to a hum -- at low speeds so they can be detected in parking lots and in other pedestrian precincts. 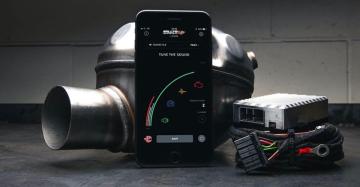