When I first started shooting and featuring modified cars from Japan, little effort was going into making engine bays look pretty, or at the very least, presentable.

At a time when both tuning companies and enthusiasts around the world were applying show car thinking to every aspect of their builds, Japan was still very much taking a function-first approach. And that made a lot of sense at the time, as performance still ruled over everything else here.

I did my best to make sure that engine bays were as tidy as possible for photos, always carrying cleaning supplies in my car so I could do a quick clean up. Yes, even simple cleaning was often forgotten about.

Fast forward to 2020 and we can safely say that, for the most part, Japan has caught up with the rest of the world in this respect. From wire tucking to metal smoothing and polishing, Japanese builders that want to go the extra mile really have got engine bay detailing down to a fine art.

Which brings us to this USDM Toyota Corolla GT-S I found at Nostalgic 2 Days back in late February.

The 20-valve 4A-G conversion sits within a beautifully appointed engine bay. There's not a hint of clutter, so your eyes are immediately drawn to details like the complex headers and the long velocity stacks.

However, the 'Engineered To Slide' stickers on the hydro-dipped cam covers was something that confused me...

Luckily, the AE86's owner, who as it turns out built the entire car himself, was around to answer my questions.

He's a huge fan of Nigel Petrie of ETS fame, specifically in the way the Australian fabricates and builds his cars and bikes. In creating this car, the Corolla owner wanted to pay homage to Nigel's build ethos by leaving no stone unturned.

The GT-S sits on air suspension and runs BBS mesh rims with faux Porsche center-lock caps. On show at Nostalgic 2 Days, one side of the car featured turbofan-style covers for a very different look.

Don't ask me which side I prefer, as both are so well suited to the Corolla's overall theme.

As a photographer, journalist and appreciator of anything cool in the automotive realm, it fills me with joy seeing an AE86 being treated to this level of detail.

That said, it's pretty much finished for the owner, who has since put it up for sale and is already thinking about his next build. If this one's anything to go by, it too should be something special. 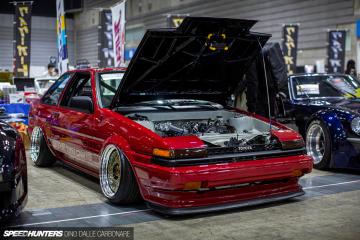