Radical environmentally friendly organic batteries are a "very promising technology" being evaulated by Mercedes-Benz for future use in road cars -- but it's at least 15 years away from mainstream production.

The technology was previewed on the future-gazing Mercedes-Benz Vision AVTR concept car unveiled earlier this year.

Organic batteries are made from graphene-based organic-cell chemistry with a water-based electrolyte. That means they don't use any rare or toxic materials or metals, making them entirely recyclable through composting. Early testing shows they also offer both a high energy density and quick-charging capability.

Andreas Hintennach, Mercedes' senior manager of battery research, said: "It's a very promising technology. I've already seen it working in laboratories, where the results look really good, but we don't see that it's close to being used in production technology for now. It's around 15-20 years away."

Mercedes-Benz has set a goal of becoming entirely carbon-neutral by 2039. To this end, it's researching a number of technologies to reduce the environmental impact of battery production -- particularly by cutting down the use of controversial materials such as cobalt and lithium. All current electric vehicles, including the Mercedes-Benz EQC and the firm's other EVs, use lithium ion battery technology. 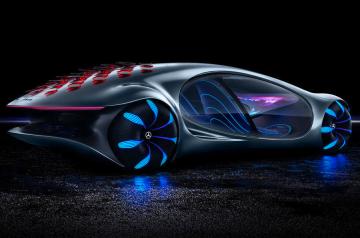