Maybe you're tired of your kids interrupting your video conference calls. Maybe you're equally as bored as they are, cooped up at home. To help beat cabin fever, it's best for all to have something to do, and now Toyota has come to the rescue with a series of paper car models you can print and put together at home.

This series is based on the Toyota 86 sports coupe and offers six different, retro-inspired liveries: six real 86s with the same paint schemes were actually created for the 2015 Goodwood Festival of Speed to commemorate 50 years of Toyota in the U.K. The cars are based on the Yatabe Speed Trial Toyota 2000GT, the Shelby Toyota 2000GT, Ove Andersson's Toyota Celica 1600GT, the IMSA GTU Toyota Celica, the Castrol Toyota Celica GT-Four and the Esso Ultron Tiger Toyota Supra.

Visit HERE to download the PDFs and print off at home, where you'll simply cut out the pattern, glue together and voilà! Each car should take about an hour, depending on your skill levels, so let us know how you get on with yours in the comments below. 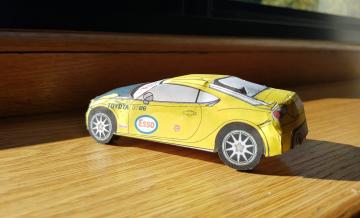