The strapline for Curbside Classic is "Every car a has story". What is this car's story? So, what do we know of this car's story? Built in 1971 at Ford's plant in Lorain, Ohio, it was first registered in the UK in 1996. It was last approved by the UK MoT test in September 2016 and is now test exempt, due to its age. Its mileage in 2016 was 26502. Other than that, we know nothing. So, the QOTD for today, as many of us have more time to be creative (except healthcare system staff, who we simply thank just as much as can), is to briefly summarise the route this car took from Ohio to Oxfordshire. And why it's on front ramps on Christmas Day. Marks for what Gilbert and Sullivan called "artistic verisimilitude". Prize? Who knows? Maybe a ride in Boris Johnson's armoured Jaguar? He's not using it right now. 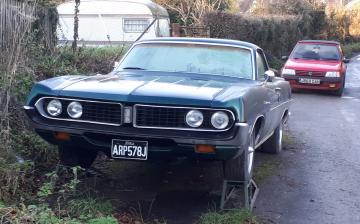