If you spend hours in your car belting down the freeway each day, or you occasionally head out on a long-distance holiday, a diesel-powered car is a no-brainer. They not only have more torque, but are usually more efficient than an equivalent petrol car, which keeps more money in your pocket week to week.

If a diesel SUV is on your radar, you could start with the 2020 Hyundai Tucson Active AWD diesel . It's the most affordable diesel Tucson you can buy, which is priced from $37,090 before on-roads . The MY20 update has had an $1140 price increase with the addition of the Hyundai SmartSense safety pack as standard, which includes autonomous emergency braking, forward-collision warning, lane-keep assist, and driver-fatigue monitoring.

In the process, the base Tucson has had a name change, previously called Tucson Go, but now known as Tucson Active with the new standard safety equipment. The only options are paint, with this Tucson covered in the $595 Platinum Silver metallic paint, which is rather smart. It's a pity you can't say the same for the 17-inch alloy wheels.

At first, the cabin looks a tad uninspiring, but on closer inspection the door and dash trim feel hard-wearing. However, there's evidence of the car being a base variant with three out of four buttons near the gear selector, and another two on the console, reading blank.

The manual air-conditioning dials are easy to read and don't clutter the dash at all, where high above it sits a 7.0-inch touchscreen with Apple CarPlay and Android Auto phone capabilities, and that's a good thing as there is no built-in satellite navigation. We did find three times during the week that CarPlay disconnected or stopped the Google Maps function.

There is a large phone tray that will fit even the biggest phone, and can be plugged into either two 12V or the AUX and USB connections. The Bluetooth is clear to hear for the driver and receiver, and takes around four seconds for it to reconnect each time you start the car.

A sunglasses holder, along with two different-sized cupholders and a removable ashtray, adds to the deep central armrest and adequate but long door pocket storage. On long trips you'll find the pullout extensions on the sun visors very handy, which cover the entire length of the side window. The fabric seats are comfortable over a long drive, as well.

Jumping into the back, leg and head room are fantastic, and you can fit your feet right under the front seats, which is perfect as the rear seats recline to stretch out even further. For an adult sitting in the middle seat, there is sufficient head room, and with a low transmission tunnel the foot room is okay, too.

Handy additions are the door pockets and two netted map pockets, along with a fold-down armrest with two cupholders, but there are no air vents or connections. You can call on ISOFIX points and three top tethers to secure bub in, or if you're on a business trip, three coat hooks are there to keep your clothes crease-free.

With the 60:40 rear seats folded using the same lever to recline them (watch those fingers, they fold quickly), the boot size comes in at 1478L, and once they are folded up it's at 488L. Two shopping bag hooks and four tie-down hooks can keep items from rolling around, and a parcel shelf can hide them. Under the boot floor is a full-size spare wheel -- a rare inclusion these days.

Under the bonnet is a 2.0-litre turbo diesel engine with 136kW and 400Nm, and it's paired with an eight-speed automatic transmission. You can vaguely hear the diesel rattle when you start the car (no engine start/stop button), but it is far less noticeable once it's moving. It's pleasant to see there is no Sport driving mode, as it really is not needed in a car that should typically be spending the majority of its time on the freeway. Mind you, there's plenty of torque available anyway, and it can be felt when the go pedal is pushed all the way.

It's well insulated when travelling at 100km/h, and with the stereo on, you would struggle to hear the engine noise. Cruise control is very simple to work, but it won't take you long to turn it off. With the cruise set, the transmission changes gears frequently on the smallest incline or decline, it doesn't do it smoothly, and it will no doubt affect the fuel economy. It's disappointing, as this car should be right at home on the freeway instead of constantly stirring the transmission and ruffling occupants.

Hyundai claims a combined fuel reading of 6.4L/100km . We got 7.3L/100km on the freeway and 10.6L/100km to and from work in peak-hour. Taking a look at Curt Dupriez's review of the Active X petrol, he got a combined reading of around 9.0L/100km. Not taking into account the different driver styles and roads used, the difference really isn't all that much between the petrol and diesel models.

Meanwhile, on longer journeys, you'll be comfortable with sufficient leg and head room, and the digital speedometer on the 3.5-inch driver information screen is always welcome to help you stress less when surrounded by speed cameras. The sweeping side windows with a chunky D-pillar and small back quarter window don't help much with visibility for head checks or children seated in the rear.

The Tucson is covered by Hyundai's five-year/unlimited-kilometre warranty and requires a service every 12 months or 15,000km. Capped-price servicing is available, with the first three visits at $390 each, the service at four years/60,000km is $510, and the five-year/75,000km service is back to $390 or cumulatively $2070 over five years.

Is the Tucson Active diesel worth the $5300 over the petrol equivalent? It really depends on how many kilometres you intend to drive, but as we discovered, the difference in fuel economy wasn't all that much, and if your drive includes freeways, the cruise control will tear your hair out. However, we were impressed with how quiet it was at cruising speed, and how spacious the cabin was both in the front and rear. 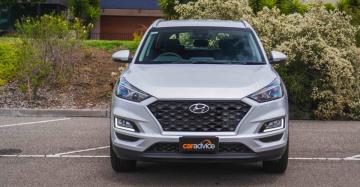