The Kia Sorento's main schtick is obviously dealing with driving around town and loading up with friends and family, but the large family SUV can often convert into an effective long-range tourer and highway mile eater.

Being the diesel AWD version, this is the most amount of money you can spend on a Sorento ($58,990). That's $3500 more than the petrol-powered equivalent, but is more frugal on the fuel.

It's worth noting that the petrol-powered Sorento is at its most efficient on the highway, as well, and the disparity between consumption is at its closest when loping along. That being said, the diesel is still quite frugal: around 8.5L/100km is what we got.

That's higher than the quoted 6.1L/100km by Kia, but it's still an impressive number regardless for a big and spacious seven-seater on the highway.

There's enough performance from the 2.2-litre diesel power plant for most of your highway driving. Flooring the pedal for an overtake at highway speeds doesn't yield anything neck-snapping, but it's enough for most scenarios.

The driveline offers a mostly refined experience, as well. Gearing in the differentials and transmission leave the engine at low revs (unless you've pinned the pedal), where noises and vibrations are well muted.

And while there aren't any active or trick suspension components being used, the Sorento feels nicely dialled in from a ride and handling perspective. There isn't an overt preference for one or the other: while the Sorento steers and handles its weight reasonably well, it also smooths out the bumps impressively. | | You may also like | ----------------- | What's great for highway driving is the general comfort and space afforded by the Sorento platform. The GT Line specification is well loaded inside, with electric leather seats. It's not a supple form of leather, but having heating and ventilation are nice boxes to tick.

The sound system is a good'un in this specification: 10 speakers' worth of Harman Kardon that help while away those long hours on the road.

The second row is heated as well (outboard), and is serviced by a great-sized sunroof that helps the airy feeling of the cabin. While the interior isn't as memorable as other options, it's impressive in terms of layout and practicality. There's a handy spot for bigger bottles in the door cards up front, and there is USB and 12V power for the first and second rows. All important things for those long jaunts.

Those in the third row might start complaining after a long drive, although it's not the worst in class in this regard. They might need to have a quiet word to those in the middle, because the second row does slide forward to free up some much-needed knee room.

No need for the third row? Fold it out of the way, and that 142L for gear grows into 605L. Enough space for all of your suitcases, in other words.

You'll notice there's a full-sized spare wheel that's underslung at the back, as well, which is something nice to have if you're contemplating a long road trip.

No, it's no sporty grand tourer hiding in people-mover's clothing. However, the family-focussed design of the Sorento pays dividends on the long highway runs. The interior is nicely practical and plenty comfortable, and the well-dialled ride makes for smooth and easy progress. 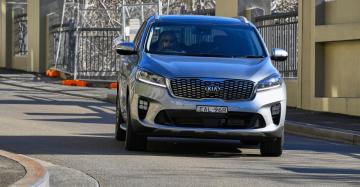