Curbside Outtake: A Datsun B210 – In The Shade

It's a Datsun B210 (Nissan Sunny in other markets). At the local supermarket. Parked out of the way, in the shade, presumably to forestall any further decay. Still, it's out there, valiantly bringing the groceries home along with its owner.

The B210 badge makes it perfectly clear. This is a Datsun, and a B210. Not the too-school for school 510, no, the soon-to-be-called-a-Sentra B210, the 2-door sedan variant, if I understand the variations correctly. I tried various services to look up the plate to no avail. I would guess it is a 1977 or 1978, judging mostly by the nose. Maybe somebody knows these better than me, or can get the plate search to work. Those are some far-out wheels, methinks. In this era, Nissan/Datsun hadn't yet decided to phase-out the Datsun name. So you get a really prominent "D" as part of the front-end. It's in pretty nice shape, all in all. The interior was relatively well kept as well.

Seems like not a bad place to spend your time, all-in-all. Except perhaps on the freeway, where the 1.4 liter engine would be straining to keep up with 2020 traffic, even with 5-speeds. I would guess this rarely leaves the pleasant streets of Berkeley. These got up to 50 mpg according to various test reports, and I imagine the owner has gotten his or her money's worth many times over. I betcha it will be still running in 2030. 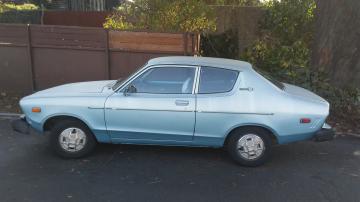