In a bid to raise money for the Petersen Automotive Museum in Los Angeles -- and more specifically, its work in educating schoolchildren -- the non-profit entity is offering the chance to win a classic 1968 Porsche 911. One that -- whisper it -- has been converted to electric power by the folks at Zelectric.

While that means the 911 doesn't have the sonorous flat-six anymore, you'll be happy to know that the Tesla Model S P85 motor installed in its place puts out 500hp, around 350hp more than the original ever had. Range is 150 miles (around 240km) at highway speeds, and there is a solar panel on the rear decklid, upgraded suspension and drilled disc brakes, LED lighting and a Bluetooth sound system with Alpine speakers and subwoofer.

Thankfully, the beautiful lines of this classic Porsche weren't besmirched. Painted in Irish Green (it is an EV, after all), the only hint that this isn't your everyday 911 -- can there even be such a thing? -- are a few cables visible under the door sills: even the charging port is hidden behind the rear license plate. The interior is pristine and is enhanced with an infotainment screen subtly placed under the dash.

Oh, we should also mention that along with the car comes $20,000 in cash, which you obviously won't need to spend on gas.

*Images courtesy of Omaze. Visit Omaze.com to get your tickets and help the Petersen help kids. 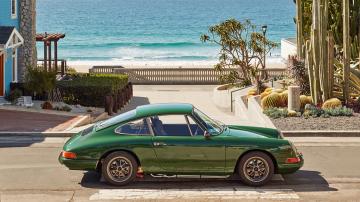