Another in a series of my reviews that appeared in the online version of African Americans On Wheels , a now defunct automotive magazine that was included as an insert in the Sunday newspapers of major cities.

This was the review where I'd finally started to "get it." After submitting, I received this e-mail from my editor:

This is a nice CARmentary. Adam, you have shown tremendous improvement in your writing and inclusion of information. If you notice, on this one and the Miata [ Thursday's Classic CARmentary ], I am allowing more of your voice to come through, as I think you are getting the rhythm and flow of information that needs to be included. Both this review and the Miata required minimum attention on my part.

Needless to say, I was touched.

In case you have forgotten, the first Sportage was pure Kia. Even though 1998 was when Hyundai took control of Kia, it was several years before product development was integrated and the Sportage became a Tucson with different threads. While I loved the look of the Sportage, that's really as far as it went. A friend of ours was enamored with it during this week, and I tried to tell her how terrible it was. "But it's soooo cute!!!!" Fortunately, she didn't buy one.

Here it is folks: the least expensive four-door, four-wheel drive sport-utility vehicle sold in the U.S. Although $19,529 for an almost fully-loaded SUV may seem like a great buy in a field where the average price is closer to $30,000, there are sacrifices for your savings.

Not that there isn't a lot that's good here. The Sportage is one of the cutest mini-SUV's although it has a more muscular profile than the competing Toyota RAV4, Honda CR-V, Suzuki Sidekick and Subaru Forester. The Sportage's garnet red paint, body-colored grill, chrome wheels and trunk-mounted spare drew positive looks.

As it is four inches shorter than a Toyota Corolla, maneuverability is superior to its larger cousins. This, combined with supportive seats (with lumbar support) and tilt-adjustable steering wheel makes it easy to find a comfortable driving position. But, again, there are sacrifices: the look of the dash, the feel of the controls and the tinny-sounding stereo system are reminiscent of "early Hyundai." The horn seems better suited for a tricycle. And the 2.0 liter engine is overwhelmed by the 3,000-plus pound Sportage, especially when combined with the four-speed automatic transmission, as in our test vehicle. At highway speeds, passing is difficult and merging becomes a white-knuckle test of timing. Stick with the standard five-speed manual and avoid the automatic at all costs. As in most vehicles in this class, the ride is relatively rough and corners should be taken slowly.

Since most of its competition are based on car platforms, the Sportage is one of the few mini-SUVs that is a true light truck, with body-on-frame construction (as opposed to unibody) and a low-range for serious off-roading. Its four-wheel drive system is part-time, with shift-on-the-fly capability using a small lever behind the gearshift.

Rear passengers will be wanting for more legroom, but the Sportage makes up for it in headroom. The rear seat folds down and forward, expanding to an impressive 55.4 cubic-feet of cargo room. Safety-wise, the Sportage has anti-lock brakes, dual front airbags, and an airbag for the driver's knees.

All-in-all, though this cute little sport-ute means some sacrifices, it does offer a few rewards. 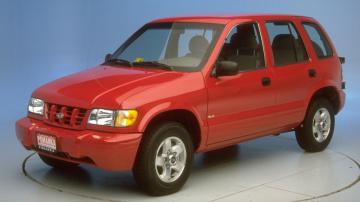