1966 Shelby GT350 ⁠ ⁠ "The Shelby was used as a street car until the early 1990's. At that time it was sent to well-known Cobra racer/engineer, Dave Dralle, to be set up for competition road racing. The Shelby has been campaigned in historic races ever since, including with SVRA, HMSA, CSRG, and has raced in multiple Monterey Reunions.⁠ ⁠ The Shelby is powered by a 289 cubic inch, wet sump, full race engine with a Holly 650 carburetor putting out 425 horsepower. It has correct front disc brakes and drum rear brakes.⁠ ⁠ It is believed every body panel on the Shelby is original, except for the GT350-R front air dam and plexiglass rear window which are GT350-R spec. The panels have always been rust free (always a California car). It is also believed there is no body filler in any of the panelsl .While it is true the car does not have racing history back to 1966, it also never became a highly modified, beat up, B Production SCCA car with fiberglass flares, oversized engine, aftermarket suspension, etc., that was later reconstructed to look like an original car. It still is that original Shelby car, with bolt on racing modifications that can be removed and replaced with the car's important original factory pieces.⁠ ⁠ Perhaps most importantly, when Dralle removed the original, matching numbers, K-code engine from the Shelby to install the racing engine, he kept the original engine. It wlll come with the car. So the new owner will have the option to race the Shelby, or restore it back to its original, matching numbers, original panels, GT350 as it left Shelby in the mid-1960's. A real win-win."⁠ ⁠ Description from the seller's listing on Hemmings.com⁠ ⁠ ⁠ ⁠ #shelby #shelbygt350 #shelbygt350h #gt350 #gt350h #carphotography #ford #fomoco #supercar #classicsupercars #mustangnation #classiccars #classiccar #fordmustang #stang #mustangsofinstagram #mustangfanclub #mustanglovers #ponycar #musclecar #americanmuscle ⠀ 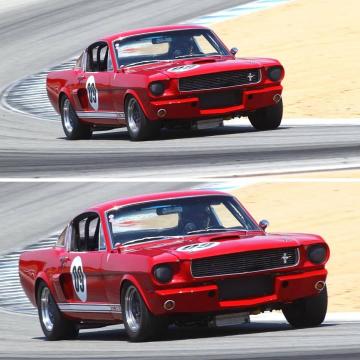