Did you know that today is a very special day for the auto world, and in particular for Detroit? If you need reminding, April 17 is 'Mustang Day'; the day the iconic Ford Mustang first hit the road. It's looking pretty spry for 56, and Ford has more reason to celebrate than just reaching this milestone.

The Mustang has also set two sales records. It was the world's best-selling sports car last year, with 102,090 cars sold worldwide, according to figures from IHS Markit. In fact, the American car is reaching farther abroad than ever before; Mustang sales in Germany increased 33 per cent, Poland had a nearly 50 per cent increase, and in France, they nearly doubled.

Not only that, but it's been the best-selling sports coupe in the world for five straight years. Not bad for the vision of then- Ford division general manager Lee Iacocca for an affordable, sporty coupe and convertible that was originally based on the economy Ford Falcon. But it's come a long way since 1964, through six generations that included some high-horsepower, big-block versions, through the late 1970s with the very iffy and underpowered Mustang II, and eventually back to its roots as an affordable, capable sports coupe.

Today, Ford offers a variety of Mustang models, from the the V6 EcoBoost to the V8-powered GT -- in both coupes and convertibles -- the Bullitt, Shelby GT350, Shelby GT350R and Shelby GT500, with a bunch of power options for each. And for the first time in its history, the Mustang now has an electric version, the Mach-E. Yes, we know that's tenuous to say the least, but, still...

Happy birthday, Mustang! We hope you have many more to come. 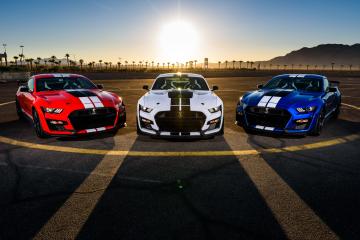