Soft landing: the plane landed on a busy highway

An emergency landing was required for the pilot due to engine failure.

The video, captured on a mobile phone, shows the moment when a plane with one engine running lands among cars on a canadian highway in Quebec on the morning of April 16. Drivers in Quebec city received an unexpected "surprise": the highway was essentially turned into an emergency runway.

According to CBC News, the plane had a malfunction, and the pilot contacted the Quebec fire Department and requested permission to land on the highway. This request was granted, and the plane landed on the road at around 11 o'clock local time. He did this even before emergency crews arrived at the scene, but their help was not even required. The pilot's skill helped the plane successfully fit into the flow of cars without hitting anyone. Interestingly, traffic on the highway was quickly resumed: it took emergency crews less than an hour to remove the plane from the road.

Of course, this is not the first time that an aircraft uses the road as an emergency airfield, but not in all situations, the pilots were so lucky. 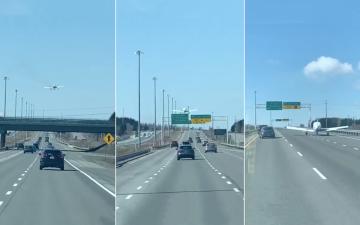