Chrysler's European sales push in the late 1980s and early 1990s has always intrigued me, so this photo of a French LeBaron posted at the CC Cohort by Benoit, hooked me at first sight. Chrysler's unusual European strategy was to make a fairly robust effort at marketing and selling cars, but with barely-modified American-market models. Some of these, like the Voyager minivan and Jeep Cherokee, became relatively successful. Others, like the Saratoga (AA-body) sedan, less so. The LeBaron coupe and convertible likely fell in between -- not exactly conquering Europe with strong sales, but building up a dedicated fan base, nonetheless.

Chrysler pulled out of European markets in 1978 when the company was facing financial doom, so its return a decade later wasn't quite a venture into unchartered territory. But much had changed during that decade, and importantly the concept of "European sports sedans" was quickly spreading to carmakers throughout the world -- which makes it doubly ironic that Chrysler decided to export rather traditional American cars to Europe. Perhaps knowing that such a strategy may not guarantee success, Chrysler's General Manager of International Sales offered an almost apologetic tone by saying "'Our motivation is not to go into Europe to take some market away from someone else, but thinking there are people there who would like to purchase Chrysler products." Old World Mopar fans rejoice! You too can now purchase K-car derivitates!

These LeBarons were sold in Europe between 1989 and 1995. Sales were modest; Chrysler moved about 20,000 to 30,000 cars annually throughout Europe, with the vast majority being Cherokees and Voyagers. LeBaron sales were probably just a few thousand per year for both coupes and convertibles, though coupes disappeared after '93. Those Europeans who did spring for a new LeBaron were likely seduced by the car's good looks -- even arriving in Europe two years after its North American debut, this was still an attractive shape. LeBarons were expensive too; the above 1990 V6 coupe was advertised at 174,800 francs -- or about $31,000. A comparably equipped US LeBaron would have listed for about $20,000.

European LeBarons did come fully equipped, however. Buyers got exclusivity, and a heaping dose of Iacocca goodies.

From this angle, the only significant visual clues that this is a European market car are the different mirrors and the round turn signal repeaters. Oddly, body-colored plugs replaced the North American turn signal repeaters... for what these LeBarons sold for, one could have expected a more elegant solution. License plates from this LeBaron indicate it is registered in the Department of Yvelines, just west of Paris. There are some indications, though, that this car's owner enjoys road trips.

The sticker on passenger door reads "Clamart Route D906" -- Clamart being a town about 8 miles east of Versailles, and D906 is a commercial avenue that runs nearby. Why those two are put together in a shield reminiscent of US Highway markers is a mystery I'd love to solve, but it seems to speak of someone who enjoys driving. And the three pennants hanging from the inside of the windshield proclaim "Germany," "Belgium" and "King of the Road." Who can argue with that? If I drove this LeBaron through Europe, I'd feel like the King of the Road as well. 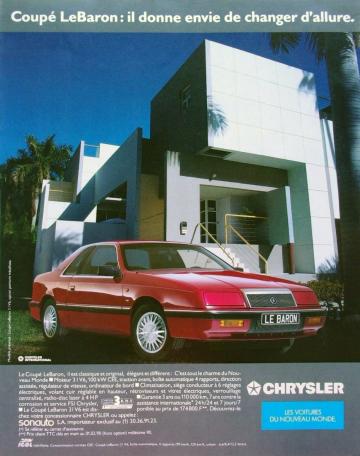