This story originally appeared in the May 2020 issue of Car and Driveras part of our 25 Cars Worth Waiting For package. Our sneak preview of the most exciting cars coming in the next few years draws on knowledge from leaked product-development plans, spy photos, and loose-lipped insiders mixed in with information that has already been officially released. The reporting for this story was completed in February and early March, before the auto industry began feeling major effects of the coronavirus pandemic. As many automakers are now delaying or pausing development programs, the debut and on-sale dates reported here may change.

This time, the Z06 will use a naturally aspirated DOHC 32-valve 5.5-liter V-8. Plus, it has a flat-plane crank, just like a Ferrari V-8. It should rev to between 8500 and 9000 rpm, spit out 600-plus horsepower, and shriek like something from Ferrari. It feeds an eight-speed dual-clutch automatic transaxle driving the rear wheels. This is no mere speculation; a detuned version of this engine is already powering the C8.R race car.

The Z06's new V-8 packs a power curve shaped like a bodybuilder's bicep. The switch to a mid-engine configuration maximizes traction, allowing Chevy to better utilize its mega-horsepower engines for battling everything on the exotic-car spectrum. A muscled-up version of the base C8's architecture will be in play, with wider rubber, stronger brakes, a recalibrated suspension tune, and upgraded powertrain cooling. Flared fenders cover the mechanical bits, and new-for-the-Vette active aerodynamics pin it to the track.

There's a chance small-block loyalists won't want a Corvette that sounds like a Ferrari. But if you've ever heard the bellicose shout of a 488 Pista, you know that's a low risk. 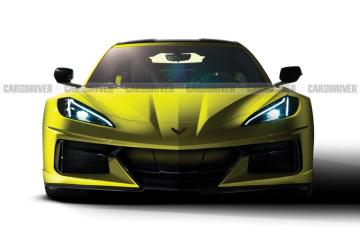