(first posted 5/22/2014) For those of you who associate the traditional American car of the 1970s with tinsel and filigree, I present this Chevrolet Bel Air wagon . It is both the largest and most basic expression of GM's biggest-ever full-size line-up and as a 1975, one of the last Bel Airs made for the US market.

Having traveled 69,000 miles over thirty-nine years, this big, black behemoth is a survivor aside from its paint job. And with its rare, extreme base specification, there are few cars like it left today. It doesn't even have air conditioning. Might someone near the end of their driving career ordered it brand new? Or was it a government fleet vehicle?

Bel Air sedans were available with a six-cylinder paired to either a three-on-the-tree until 1973 or Powerglide until 1972. Wagons were mercifully not paired to anything less than a 400 four-barrel V8 backed by a Turbohydramatic, but as a small block, with the extra displacement mostly coming from a larger bore, it sure looks tiny in that engine bay.

Nevertheless, I really like the '71-'76 B and C bodies. The wagons, particularly, are gigantic with a lot of glass. The wraparound rear windows give it a much more modern look than the boxes which replaced them and in black, it looks great with dog-dish hubcaps and plain, painted flanks. It's impossible not to be reminded of the era's freshly-released jumbo jets or of a glassy airport terminal. Even with the choked engines under the hood, the impression of heft, strength and capacity is undeniable, and in this most basic model, the illusion isn't tempered by any effete trim.

Even the most basic models were given a foldaway rear window and tailgate. I'm not sure if this is a manual or power tailgate, but not having to wait for motors to complete the job of moving those large panels into place seems like a greater luxury. As much as I'm bowled over by the standard fitment of a retractable fifth door, most people went with the other whopper of the era, the Ford LTD wagon. They must've known something GM did not.

The Bel Air continued until 1981 in Canada, where more people could be convinced to buy an vinyl-lined room on wheels. The institutional vibe of this wagon had limited appeal, and this Bel Air couldn't be more different than the 1986 LeSabre that was yesterday's headliner. People at the lower end of the market didn't want capacity as much as they wanted economy and when it came to full-sizers, more feature content was expected. If towing wasn't a regular chore, I can easily see this being replaced by a base level Plymouth Voyager. That, of course, is a familiar story.

In the case of either the Plymouth or this Chevy, this sort of very basic specification is rare. From this angle, with all the doors open, the mismatching mirrors are evident, as well as the full-width bright trim around the windows which doesn't appear original. Like the '73 LeSabre JP Cavanaugh posted, it appears that at some point, someone didn't like how the frames looked originally, but it's a tasteful modification which works well with the black paint, dog dishes and white wall tires. All it needs is a enthusiastic new owner to keep it pretty; which savvy Swede will the lucky one who scoops this up? 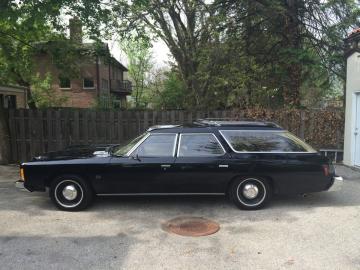