If you were hoping to browse the mouth-watering classics at this year's Pebble Beach Concours d'Elegance, don't break out the collared shirts just yet. The event has been cancelled for the same reason everything else you wanted to do is now impossible. Pebble Beach officials have decided to nix the show, originally scheduled for August 16th, rather than risk the health of entrants, judges, and volunteers.

"My heart goes out to all of the people who are involved in the Pebble Beach Concours and who are impacted by this decision," said Concours Chairman Sandra Button for the announcement. "Many of our entrants have been working on a special car for years, and this was to be their moment. Some of our overseas entrants were nearing the point of putting their cars on boats and planes, and their own travel arrangements have long been made. The same is true for many of our international cadre of judges."

Button continued. "We thank all of the enthusiasts who have gathered at Pebble Beach time and again to renew long-standing friendships, celebrate great cars and give so generously to Concours charities --- and who have already expressed their support for the coming celebration no matter the date."

With the event scheduled for August, it seemed as though Concours d'Elegance wasn't in any real danger. Organizers actually informed applicants of their acceptance earlier this month, noting that entrants should plan to ready their vehicles even if there was a delay. Something must have changed to necessitate a full-blown closure.

Perhaps organizers just wanted to keep things simple. Rather than trying to find a way to pull the show off a month or two later than planned, everything is being transitioned to next year's event. Features will remain as planned, with a display of previous Best of Show winners along the edge of Stillwater Cove and new special classes focusing on Pininfarina, the world's oldest electric vehicles, Porsche 917, Talbot-Lago Grand Sport, and the Carrera Panamericana. They'll just be happening on August 15th, 2021 .

All tickets purchased to date for the 70th Pebble Beach Concours d'Elegance will also be valid for next year. However, those seeking a refund may contact info@pebblebeachconcours.net.

"Pebble Beach Company has been pleased to host this event since its beginning, and we look forward to hosting the 70th celebration in 2021," said Company CEO William L. Perocchi. "This event does more than celebrate great cars; it benefits so many people in need. Ultimately, the continued health and safety of everyone associated with the Concours is our number one priority, which led us to this difficult decision. We recognize that cancelling the 2020 Event will be disappointing to many, although we are confident it is appropriate under these unique circumstances." 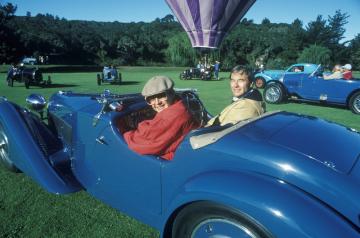