There's one sure-fire way to make the Chevrolet Camaro 2SS even tougher -- with a Walkinshaw Power Pack added to the mix. More noise is just what the doctor ordered, too.

The only major issue facing the 2019 Chevrolet Camaro in Australia is the fact that the cost of locally converting the car to RHD puts it in a higher price bracket than it otherwise would be.

Take the often-deluded blue versus red grudge match out of the equation, and the Camaro is a demonstrably better car than the Mustang. If it competed on a level playing field, it wouldn't even be an argument.

However, it doesn't compete on a level playing field, so that's something of a moot point. And that's not to say the Mustang isn't a great-value muscle car either. It's well priced and does everything buyers expect of it, so it's hard to critique that achievement by Ford.

You can read our thoughts on things like the cabin, infotainment and general user-friendliness of the Camaro in our review of the regular 2SS. Here, we'll focus more on what the Walkinshaw enhancements bring to the table.

I do like the Camaro 2SS in standard trim. I reckon it's an accomplished muscle car, and price aside, it also does exactly what potential buyers will expect it to do. However, if you have the coin to buy one in the first place, and you want it to be a little bit different, then maybe you should let Walkinshaw loose on it...

Here, we're therefore sampling the Walkinshaw-enhanced Camaro, with some tasty (and raucous) additions to an already potent package. It's just the tonic you might need if a front-engine, RWD V8 heavy-hitter isn't enough for you.

At the time of testing, the base 2SS lists at $89,190 before on-road costs for the automatic transmission . Decide to fettle it further and the Walkinshaw Performance Power Pack adds $9990 to that equation. Price isn't all it adds to, though, and therein lies the appeal. | | You may also like | ----------------- | A climb of 15 per cent more power and torque ticks a few boxes, but the exhaust note is for us the most enticing aspect -- loud, boisterous and tough as nails -- just the way a large-capacity V8 should be.

Walkinshaw doesn't need to do a huge amount of work either, but power and torque climb to an impressive 390kW and 710Nm from the factory 339kW and 617Nm ratings.

We chatted to Walkinshaw Performance Operations Manager, Richard Jong, and he told us that the team is impressed by the LT1 V8, even out of the box. As such, and with the supercharged ZL1 in mind also, there was no real calling to go full-house with the power pack.

"The Camaro 2SS as a package out of the box from HSV is already very potent," Richard told us.

"Customer feedback highlighted the opportunity for us to improve the characteristics of the standard exhaust. More specifically, we tasked ourselves with extracting the V8 guttural grumble and growl that you would expect from a muscle car, while maintaining some of the factory pops and crackles."

Internally, Walkinshaw reckons it's the best-sounding exhaust it has ever produced, and that might be a big call, but it does sound phenomenal, even at part throttle. Let alone when you really open the taps.

As you'd expect, exhaust alone isn't the answer, and Walkinshaw paired the nasty exhaust with a revised intake system.

"The next logical step was to give it an airbox and a tune to develop the Power Package," Richard explained.

"We did testing on various different airbox configurations and found that our implementation gave the best performance, while retaining a great look under the bonnet with the carbon-fibre lid. The airbox on its own on our bench flow test gained 14kW compared to the standard airbox alone."

Further, there's an ECU calibration -- as you'd no doubt expect -- Walkinshaw Performance badges, and a three-year/100,000km warranty. The exhaust system is a stainless header, three-inch from the cat back design, with electronic bimodal activation and four-inch billet alloy tips. The tips can be optioned in either a silver or black finish.

If you want either the intake or the exhaust separately, they are both available individually. Although, having driven the full Walkinshaw pack, I'd opt for the whole lot.

There's absolutely no doubt that Australia produced heavy-hitting V8 sedans for decades, the best of them from both camps right before their respective shutdowns, but spend any time with a Camaro, and indeed the Mustang, and you do have that sense of 'what if' for all the years we missed out on proper performance two-doors.

Sure, we had the Commodore-based Monaro in the 2000s and a smattering from Ford and Holden through the '60s and '70s, but wouldn't it have been a bonus to be able to buy American two-door iron all this time?

Our test car had a Walkinshaw sticker pack, which being white on white wasn't really that noticeable as such, but a quick straw poll in the CarAdvice office determined that we'd prefer our Camaro devoid of decals.

So, we already know the LT1 is a 'proper' V8 in the classical sense, but when you open the exhaust system, it is also 'properly' loud, too. Not stupid loud either, menacingly loud, with just the right amount of attitude. It might not appeal to the neighbours, but who cares? If you own it, you're going to love it.

It delivers a hefty rumble at idle and light throttle, then erupts into shattering explosions of aggression through the mid-range and on to redline. On the overrun or deceleration, it fires and crackles with intent, sounding more like a NASCAR than a street-registered daily driver. We love a muscle car done right at CarAdvice, and the Walkinshaw enhancements to the Camaro very much fit that bill.

In time-honoured muscle car tradition, the LT1 shows its intent if you're not wary when you exit corners specifically. The Goodyear Eagle A1 Asymmetric 3 tyres are sticky and proficient, but the engine will quickly ensure they lose their grip on the tarmac if you're lacking in tact with the application of the right pedal. While it might be tail-happy at the limit, the Camaro is fast, genuinely fast, when you want to slice through corners on a twisty road.

Sure, the chassis can ultimately be overwhelmed and overawed by the bountiful power and torque on offer, but that's half the fun. And half the point. None of the great muscle cars ever wore subtlety as a badge of honour. In fact, I'd be offended a little if this one did.

To be honest, I'd probably flick the run-flat tyres you get standard and come up with a work-around. A car with this much brutal power on offer should be shod with as much tyre as you can throw at it, in a traction sense, and a step up in rubber would make a big difference. There's nothing wrong with the run-flats until you really get into it, mind you.

And, there's nothing here that intends to be negative in regard to the chassis either. It's actually beautifully tied down, rides on the firm side, and manages the power well. While our worst road surfaces will ensure that firm ride feels even firmer, it's excellent everywhere else.

What is interesting, though, is that we know from Josh's launch drive that the ZL1 benefits from the adaptive dampers that have been added to the suspension's performance mix. And you get the sense the Walkinshaw Camaro would, too. But then, the price would go up. A fair bit.

And, in reality, once you learn the limits and respect what the prodigious engine is capable of, the Walkinshaw-tuned Camaro is an absolute blast.

We've mirrored our 2SS scoring here, because while the Power Pack-equipped Camaro is a more tantalising prospect, our overall thoughts on the Camaro remain unchanged. It's a proper muscle car, built well, and it does exactly what the intended buyer will want.

It's a reminder that a svelte two-door body wrapped around a quality chassis, and hiding a snarling bent eight, is a near-perfect mix of daily usability and weekend fun. It might have taken a while, but buyers in Oz now have two options to choose from -- and I know which one I'd have. 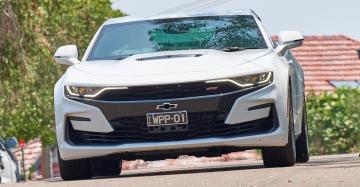