( first posted 5/16/2014) Here's a rather rare find, a 1961 Falcon Sedan Delivery found near the harbor in Eureka, CA, basking in the evening light. Oddly, the last time we were there a year ago, I also found and shot a '61 Falcon (sedan). They're obviously popular here.

1961 was the first year for the Falcon Sedan Delivery, and according to one source, it was the high-water mark for sales, although that really isn't an apt expression in this case. According to falconclub.com , only 1,988 of these were sold in the US that year, and sales went downhill from there. 1965 was the last year for the SD, with only 539 made. It would appear that the Sedan Delivery was well on its way to becoming an obsolete body style, despite the Vega's ill-fated attempt at a come-back. This one is the first one I've run across in a long time, and it's sporting some very well-developed patina, likely as a consequence of being exposed to well over half a century of salt air coming off Humboldt Bay. I make that assumption based on the "Harper Ford" license plate protector; Harper is Eureka's long-time Ford dealer. So this is a home-town car. I wonder what its original job was? Needless to say, one only sees serious rust in California near the ocean. Sadly, there was evidence of any sign on its side that might have given a clue as to its original owner or purpose. Maybe I'm just not good at reading Rorschach blotters. The interior isn't exactly all original anymore. That upholstery came from a deluxe Falcon.

The steering wheel is of course Pep-Boy-ish after-market, but the shifter "knob" is rather original; that's a new one for me. I'm not sure how comfortable it is for its actual intended purpose, and the little Falcon six does rather need to be rowed vigorously to affect any measurable forward progress faster than a sailboat. I'm guessing it's got (or had) the base 85 (gross) hp 144 CID inline six; the 101 hp 170 inch six became optional in 1961, but somehow it doesn't seem likely that a sedan delivery buyer would pony up for one.

I'm a wee bit perplexed by the cargo area. According to one source, there was no rear seat; just a plywood cargo floor. But this rather looks like a folded-down seat. And there's the brackets for the seat to be locked into its upright position for take-off or landing. Hmmm... Sadly, Google can't deliver any images of the back of a Falcon Sedan Delivery when I need one. Anybody know if this is original?

For our ever-growing number of readers from down under, I will note that there was a Sedan Delivery version of the Australian Falcon too. This image is from 1962; it might be the first year for it (or not). But as is pretty readily apparent, it's actually quite different from the American version. The doors are from the four door (there were no two-door Australian Falcon sedans), and the whole rear body is different, the biggest change being less rear overhang, as well as different design details. It is of course also based on the Australian station wagon, and we covered the differences of the Ozzie Falcon wagon to the American version here .

Obviously, the American Falcon Sedan delivery is based on the two-door wagon, which makes it look considerably less cobbled-up and more...professional (sorry). No doubt we'll hear about its deficient suspension though, that wasn't capable of delivering six heifers in the back across thousands of miles of outback without complaints (from the ball joints as well as the cows).

Yet it seems to have been quite adequate for this long-lived Sedan delivery, even if it only carried...what did it carry? I'm heading off to bed with an un-answered question, and that's not such a hot idea. But we know what it's delivering now: plenty of hipness. 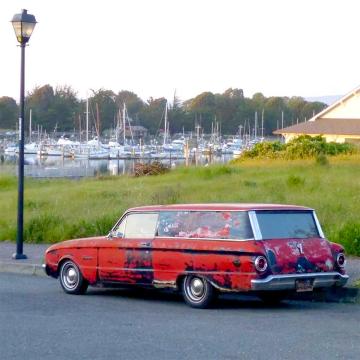