On April 19, Mikhail Shvartsman died, he was only 53 years old. He is the father of Robert Schwartzman, a Formula 3 racing champion. In the current season, he is competing in formula 2 (the season of Which, of course, is now interrupted). The name of the driver constantly POPs up in the lists of potential newcomers to the main motor race in the world --- Formula 1.

French actor Maurice Barrier starred with the main stars of the 70-80's-Gabin, Belmondo, Delon, Depardieu, Richard. From the films with his participation, you definitely remember the comedies "Tall blond in a black Shoe", "Runaways", "Dads", "One woman or two", the crime drama "Police story", the action film "Outlaw" ... his roles are not the main Ones, but they are memorable. The actor was 87 years old. Maurice Barrier starred in films from 1966 to 2007 and played people on both sides of the law.

Coronavirus took and 68-year-old American actor Jay Benedict. In big movies and TV series, he was in episodes (in "Strangers", for example, played the father of the girl newt, but did not even get into the credits), voiced computer games, commercials on television and radio.

You probably don't remember Jay Benedict by name, but you probably know His face.

10 naive questions about coronavirus and cars

Lucia Bose played in the films of Michelangelo Antonioni "Chronicle of one love", "the Lady without camellias", starred with Federico Fellini in "Satyricon", Juan Antonio Bardem (uncle of the current famous actor Javier Bardem) in"Death of a cyclist". In this photo, Lucia Bose shows what she was like when she was young. Designer Sergio Rossi helped fight the pandemic,but he became a victim of the disease. Princess Maria Teresa of Bourbon-Parma, first cousin of king Philip VI of Spain. Goyo was one of two club players awarded by real Madrid President Santiago Bernabeu Laureada for services to the club. It is Mrs Kintner, Fierro's character in Jaws, who slaps the police chief for not closing the beach after being attacked by a giant killer shark. Allen Garfield has appeared in more than 100 films and TV shows. Among his works, Roman Polanski's "Ninth gate" is most often called. Richard Mason was a great actor. If you want to make sure, review "Dundee nicknamed "Crocodile"". Or look for the first time, if you haven't seen it yet. This is a great movie. 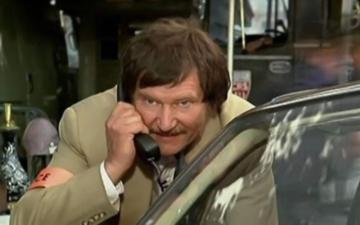