I once converted my bone-stock and notably shabby 1982 Honda Civic hatchback into a sweet rally car. This was a simpler exercise than you might imagine. After all, I had plenty of time to do it. As it turns out, when you're a college freshman, nobody cares if you show up for class. How cool is that? Well, nobody cared but my parents, that is. But they wouldn't know about it for at least several months, so what the hell?

Here's how I transformed my eight-year-old daily driver into a rough-and-ready dirt monster: I would depart my dorm with my friend, who had a similarly laissez-faire approach to attendance. We'd get into my cigarette-butt- and soda-bottle-filled Civic and drive about 45 minutes north to a wooded area near where I once served as the least gregarious counselor at a church-sponsored summer camp. At that point, I would simply drive as fast as possible on a random selection of lumpy, root-and-rock-punctuated dirt paths in the woods, occasionally glancing off trailside trees. That's it. The world was my special stage. Well, the world in the immediate vicinity of Hastings, Michigan.

It never broke. Or at least not in a way that prevented it from taking more abuse. And it remains the first and only car I've ever named, because that's a weird thing to do.

It was monumentally stupid. But stupidity without meaningful consequences is known simply as "fun." And apart from my education, there were no meaningful consequences. The Civic, which had earlier gained the name the Stinking Horkbug for reasons that escape me, never faltered. It never broke. Or at least not in a way that prevented it from taking more abuse. And it remains the first and only car I've ever named, because that's a weird thing to do.

Perhaps its grit had something to do with the fact that, by the time I got it, it was sort of prebroken. It had already lived a rough life. It was painted Rhodes Red, which wasn't actually red but more of an orangey, dusty-rose sort of color. Except for the driver's-side door, which was actually red. Under the rear seat, I found a sheet of shattered glass held together by a sticker from the local hard-rock radio station, WLLZ.

In my care, the ignition switch stopped locking, so I could pull the key out when buzzing down the expressway. It became my favored parlor trick. I would secretly pull the key out of the ignition when my passenger wasn't paying attention and say, "Hey, can you hold this for a second?" They would then freak out and I would cackle. Never got old. Not to me, anyway.

And though I certainly didn't realize it at the time, the Horkbug was my entree to the Car and Driver mindset.

The Civic's three-speed automatic could be shifted into or out of any gear, including park and reverse, without having to press the button on the knob. That made the zone around the shifter the only place in or around the car that needed to be treated with care, lest one of my moron friends bump it into reverse when we were traveling at 80 mph.

The three cars I'd had prior to the Civic included two examples of '70s American junk and a 1971 MG Midget, so reliability and durability were foreign concepts to me. As were practicality, efficiency, and front-wheel drive. Also, my Honda had neither a landau top nor finicky SU carburetors.

And though I certainly didn't realize it at the time, the Horkbug was my entree to the Car and Driver mindset. This journal was forever extolling the virtues of clever and efficient engineering. Yes, there were plenty of sports cars and the occasional bloated Oldsmobile in the magazine back then as well. But at its consumer-focused core, Car and Driver of that era was a champion of smart cars. And Hondas were honest, well-built products, designed by and consumed by smart people.

The teenage me suspected that might just be bunk. That is, until I owned one. Until I raced one. And commuted in one. And though the Horkbug made closer to 50 horsepower than 100 and was saddled with an automatic trans, it was light and lively and agile and quick-witted. It deserved a better owner than the college-era me. But it taught me more than my professors did. Or than my professors might have. 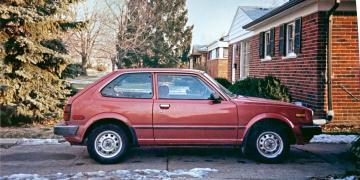