Following America's pioneer days, fossil-fueled conveyances came to the Old West even slower than potty stops came to Comanche country. Our westwardly mobile pioneers used the Conestoga wagon, which could haul through hell and high water an entire household, including the missus's kitchen sink.

Today, Joanie-come-latelys clamber up into Ford Expeditions or Jeep Grand Cherokees to rise above the dangers and deprivations of life on the move. Even Mercedes- Benz has introduced a sport-utility vehicle, its newfangled ML320, much tidier than the largest of the behemoths, which require stair-stepping on servants' backs just to ascend their helms. Mercedes, however, is also releasing its slick new sedan-based E320 wagon.

Configured as a sporting five-door with room for seven---thanks to a standard folding third-row seat---it's fitted into a sensible, low profile station-wagon form.

Inside are generally good ergonomics, comfortable seating, a split fold-down middle seat, and a no-see-um luggage shade that pulls out horizontally from the middle seatback. The front seats are especially comfy, and the interior proves roomy without overbudgeting sprawl space. You could say it just fits you well, much like its look and how it goes together. An ergonomic faux pas: Controls for the outside mirrors are located down on the console instead of up by the mirrors and are tiny---not the distraction you want to be groping for on your chosen autobahn.

The E320's handling and braking may help compensate. As usual in Mercedes-Benzes, they reassure. And these four-wheel discs and their anti-lock braking system are bolstered by "brake assist," which can detect a panic stop based on how quickly the brake is applied and then apply full anti-lock braking almost instantaneously. Translation: If you don't slam on the brakes hard enough, the system will do it for you. An optional electronic-stability program can detect an impending spin or slide and apply selective braking on any of the four wheels to keep the car going where the driver is pointing it.

Rather than an overconfident view down the hood of a mastodonlike sport-ute, the E320 wagon shows you a level-headed view over the silver star and delivers real deftness over the road. You'll find M-B's zingy new transcontinental prairie schooner and Rocky Mountain degrader to be utterly unlike all the latterday Conestogas, which lumber out of Detroit, Tokyo, and London like so many oxen gussied up for the 4-H show. The E320 is the hot tip for the wannabe wagonmaster who favors not the pull of oxpower but the push of---heh, heh---rear-drive horsepower. (Spirit of Ward Bond, eat your heart out.)

This year, Mercedes will offer the E320 with all-wheel drive. The drivetrain is similar to the one in the M-class sport-ute, except that it provides a 35/65 front-to-rear torque split (the ML320 splits torque 50/50).

The E320's beveled headlights may look "froggy" to some, but to us they look like unblinking aero efficiency. They stare accusingly at the hammerheaded four-wheel- drive luxury-sport-ute throng. The big utes can't hope to compete with the Benz's performance, or fuel economy that ranges between 20 and 27 mpg. Mercedes has targeted Jeep's Grand Cherokee, Volvo's new V70 wagon, and Audi's upcoming A6 wagon. None will approach this E320's $47,983 base price (all-wheel drive will add $2790). All told, they define a market segment riper than the figurative tomatoes the behemoths should have to duck.

Whether the behemoths can lord it over the old hands and new thinking at Mercedes-Benz remains to be seen. 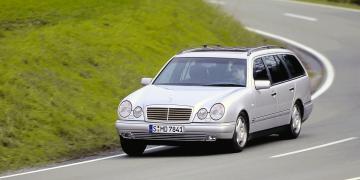