The new Audi A6 plug-in hybrid is now available in estate form, following the recent unveiling of the saloon variant.

The A6 55 TFSIe quattro, first revealed at the 2019 Geneva motor show , takes its power from a 249bhp 2.0-litre four-cylinder petrol engine, with a 141bhp electric motor integrated into the gearbox for a combined output of 362bhp. This powertrain also features in plug-in hybrid versions of the Q5 and A7 Sportback .

Power is sent to all four wheels through a seven-speed dual-clutch automatic gearbox, with maximum torque output rated at 369lb ft. The saloon will accelerate from 0-62mph in 5.6sec (0.1sec quicker than the estate), with both variants capable of a 155mph top speed.

The 55 TFSIe can run on electricity alone at speeds of up to 84mph for 33 miles on the WLTP combined cycle in saloon form, and 31.7mph in the estate. Audi claims "customers can do most of their daily driving electrically".

Audi claims a charging time from empty of around 2.5 hours from a 7.4kW charger, while the firm's MyAudi smartphone app offers drivers sat-nav instructions based around public charger locations. The app can also be used to control air conditioning and heater settings before entering the car. 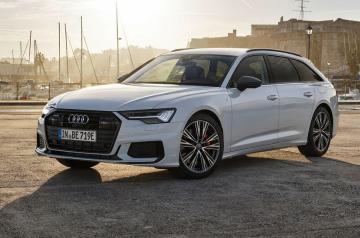