World leaders like to travel in comfort, security, and style --- which is why you never see presidential motorcades formed around a Nissan Versa. Instead, security details crowd around something big, black, and closely tied to a domestic nameplate if the nation in question has such a manufacturer. In China, the preferred choice among high-ranking government officials has been FAW Group's Hongqi luxury brand. Translated into English, the name means "Red Flag" and it's the pride of China, even though the bulk of FAW's premium models are a redux of various automotive products produced by foreign manufacturers.

That includes Hongqi's first vehicle, the CA72. Launched in 1958 as a model exclusive to state institutions and the leadership of the Communist Party of China, the CA72 was basically a 1955 Chrysler sedan with a different grille. While that model line has had its own evolution, subsequent FAW products from the modern era benefited from joint partnerships with automakers like Mazda, General Motors, Toyota, and Audi.

A new joint venture specifically targeting Hongqi is now underway, and its a curious one. An American electric vehicle startup named SilkEV is apparently teaming up with the brand that symbolizes the CCP to produce high-end performance cars, and they're spending a bundle to do so.

Considering Hongqi is known for manufacturing luxury products, zippy EVs are a step out of its comfort zone. However, Reuters reports the duo plans to invest 10 billion yuan ($1.41 billion USD) to make electric sports cars under the Red Flag marquee:

Silk EV on Monday told Reuters it has signed a memorandum of understanding with FAW to launch a joint venture in the state-owned automaker's hometown of Changchun, northern China, to make cars it has dubbed the S-series.

The plan was first reported on Friday by state media CCTV and Xinhua. FAW confirmed the CCTV report to Reuters .

S-series, eh? Sounds like Hongqi's habit of borrowing from other nameplates hasn't abated. But at least it's getting more creative. Besides, there are plenty of non-Chinese automakers that have been trying to parody the German way of doing things for years (cough, Cadillac) instead of evolving their existing modus operandi.

While Silk EV's status as an LLC officially makes it an American company based in New York City, it has offices in China and Italy, with the brunt of its engineering and design work focused on the former market. What that all entails remains hazy. Its website describes it as complete auto solutions provider (provided they're electric) with "an elite team of engineers." No examples were provided for either, and this is the first we've heard of the firm.

Cursory research shows Silk's head of U.S. operations, Justin Krane, previously worked as legal council for Trella Urban Forestry Technology LLC (where he's still employed). He was also quoted in a press release last year when Acorn International promoted the company in China. Other than the address for his law office matching the address given for the automotive business, that's about all we're likely to learn until Silk EV responds for comment.

Meanwhile, Chinese state media says FAW plans to broaden Hongqi appeal and double its annual sales to 200,000 units by the end of 2020. While the pandemic may upend those plans for growth, the overall strategy involves increasing its lineup of 10 models to 21 by 2025.

The first product Silk EV is likely to lay its hands on is the Hongqi S9 (below) --- a 1,400 hp hypercar that debuted (in concept form) at the 2019 Frankfurt Motor Show and looks a bit like the McLaren Senna. FAW Group chairman Xu Liuping said the S9 will be capable of 62 mph in under 2 seconds thanks to its "V8T hybrid power system" (presumably a turbocharged V8 helped by small electric motors). The car is also supposed to boast a top speed of 250 mph, a maximum range of 373 miles, all while still being incredibly comfortable, sharp, and a bunch of other stuff that makes it sound too good to be true. 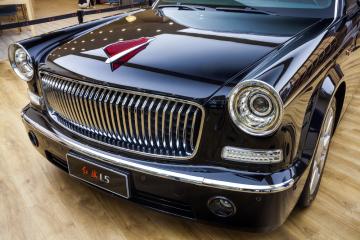