So that's the message: the new 4 Series Coupé, which goes by the BMW codename G30, is intended to be not only a more sporting car than any of its predecessors but also more comfortable and, crucially, further differentiated from the 3 Series upon which it's heavily based .

This is an observation that could be made of its styling as well. Although the two prototypes I drove were both heavily disguised, the new 4 Series appears sleeker than the current model and is clearly more differentiated from its saloon sibling.

We'll avoid any comment on the controversial grille, which is set to mirror that of the Concept 4 Series Coupé revealed at the Frankfurt motor show last September, until we see the production version.

However, the car certainly cuts a sharper profile than before, with a long sweeping bonnet, a more heavily sloping roofline and a rather high-set bootline providing it with clear aesthetic links to the larger 8 Series Coupé and, according to van As, improved aerodynamics -- namely a lower drag coefficient and added downforce. There's also greater volume to the wheelhouses, allowing them to accommodate rims of up to 20in in diameter.

The new 4 Series looks bigger up close, although not excessively so. Underneath, it's based around the same CLAR (Cluster Architecture) as all other recent BMWs that have a longitudually mounted engine, giving it a wheelbase 42mm longer than its predecessor's, at 2851mm.

BMW engineers aren't at liberty to reveal exact dimensions just yet, but they suggest the new car is also slightly longer and wider while being 57mm lower than the 3 Series saloon.

The Coupé will once again head a family of 4 Series models, with successors to the existing Cabriolet and Gran Coupé to follow in 2021. The latter four-door also forms the basis of the new electric saloon, the i4 , which is also due out next year.

With more than six months still to go before the model heads into showrooms, BMW has confirmed just variants so far: the 430i and M440i. However, I'm told the line-up will extend to include replacements for the 420i, 430d and 435d as well.

The two-door will also, of course, form the basis of a second-generation M4 , which is planned to be unveiled as a rival to the recently upgraded Audi RS5 Coupé and upcoming new Mercedes-AMG C63 Coupé within the next 12 months.

The M440i xDrive is the obvious highlight of the line-up at launch, offering junior M4 qualities and the added security and all-season capability of BMW's latest four-wheel drive system. Its turbocharged 3.0-litre in-line six-cylinder engine is combined with a 48V electrical architecture in a development that introduces mild hybrid properties, including off-throttle coasting. 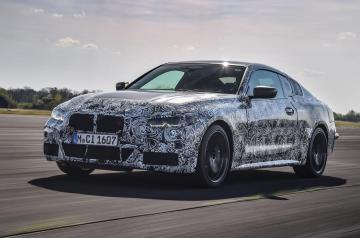