The whole family of Zhiguli: the history of the Niva

When the question of creating a four-wheel drive car arose, there were two ways. The first is not to "reinvent the wheel", but to create a classic frame all-terrain vehicle on Zhiguli units with a canvas top and plug-in front wheels. But they chose the second way. VAZ-2121 (1977-present). Using lighting technology from Zhiguli, VAZ engineers managed to create a very nice and harmonious car.

From Zhiguli used everything that can be: from the engine with a transmission to lighting and appliances.

And VAZ-2121, a supernova superstar, was born --- a unique car for those years . A good three-door load-bearing body with a full interior, permanent four-wheel drive, passenger behavior on a flat road --- nothing like this has ever been seen in the world.

The layout of the center console is similar to the VAZ-2106.

Pay attention to the lamps under the temperature indicator --- the yellow one was switched on when the Central differential was locked.

Against the background of utilitarian and austere SUV interiors of those years, the interior of the Field was a real revelation. And, unlike the later model of '92, it was not a "rattle".

Niva became the main locomotive in the foreign market. And we are not just talking about the countries of the socialist camps-VAZ-2121 was delivered to Western Europe, North America, Australia and New Zealand under different names. Niva grew up to be a superstar --- she was met on all continents (even in Antarctica), was a heroine of Motorsport and a movie actress --- no Soviet car shone so much in foreign films. What is worth one of her appearances in "the Incredible life of Walter Mitty", where in Iceland on the Field of heroes are saved from an eruption of a volcano. The front seats are from Zhiguli. Unique difference: these can be flipped back to get back. The back sofa was not changed until this year. You can only drive there for a long time together.

Of course, the concept of comfort to the Field is applicable with reservations. After the Zhiguli, it is noisier, transmission vibrations walk around the cabin, and the distributor howls. The consumption is higher, the dynamics are worse, and the maximum is lower. But against the background of most SUVs of those years, it was a breakthrough. And the passability of the passenger legacy did not affect --- off-road Niva is a very formidable weapon. Excellent "geometry", downshift and locking of the center differential. Due to the compact size of the spare wheel there was a place just under the hood. There it remains to this day. The volume of the trunk for such a car is expected to be small. A high threshold complicates the loading process. The original VAZ-2121 can be easily recognized by the rear part with lights from VAZ-2106 and a trunk lid that reaches only to the waist of the body. Legends don't die: Niva and its most unusual modifications

Having appeared 43 years ago, Niva is still in service. There's a lot behind us upgrades , and if you move from the first VAZ-2121 to the current 4×4 Fret, the difference in comfort level is obvious. Although in fact it is the same small SUV that made a lot of noise.

The success of Niva proved that Tolyatti can create its own car. But a completely new front-wheel-drive generation of cars is planned to appear in 1983. So, until that time, we need to carry out a deep modernization of the Zhiguli.

The fourth and final part of the history of VAZ "classics" --- very soon on our website. Check back often!

The editorial Board of Za rulem expresses its gratitude to the administration of Avtomuzey Motors Oktyabrya for their help in organizing the shooting. And also to Dmitry Solovyov, Ilya Chistov, Alexey Lyskin, Sergey Belyaev, Kirill Simonov, Denis Izotov and Stanislav Geibov for the cars provided. 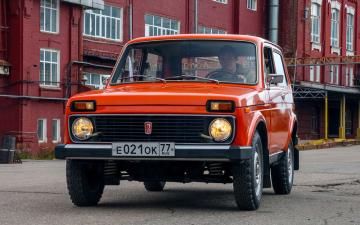