Thanks to Gav in Tassie.

In the early '70s a weird modification on the W115 220D was produced in Argentina, named "double cabin", what would be a "crew cab". The car was a typical sedan up to the rear door, and then there was the short bed of a pickup. The overall length was similar to that of the sedan, and usually the pickup bed would be covered with either a cloth or a fiberglass cover. As far as I remember, all of them had steering column gearchange and little less to differentiate them from the Montevideo sedan taxicabs. I guess there was some tax incentive in not building the normal model, as well as assembling them probably with some Argentinian local content. I don't remember if there was fiberglass involved. * Reply

Handy looking vehicle and no problems doing that in Tassie, though it has new plates so perhaps reregistered after the conversion, unless theyve changed the rules since I left cars were inspected upon first registrarion then never again, with the diesel engine that thing should haul a decent load, I like it.

Hope that has self leveling suspension, removing the bootlid from a P76 showed up shortcomings in that department its job was firewood for the kitchen stove and more would go in than it could move with. 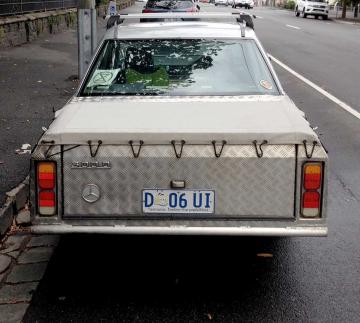