Goldilocks would like the 2020 Audi S5 Sportback. Well, she would if you consider Audi's mid-size A5 hatch lineup as the beds, chairs, and porridge that little Goldie tries out during her ill-conceived breaking and entering. The A5 Sportback's 248-hp turbo-four would undoubtedly be not quite enough, and the 444-hp twin-turbo V-6 in the RS5 Sportback assuredly would be a bit much. However, the S5 Sportback---with its 354-hp boosted V-6---would surely strike Goldie as just right.

The Definition of Hotness

A thorough refresh for the 2020 S5 Sportback takes an already fetching car and makes it more beautiful. Even when set against the two-door S5 coupe and cabriolet, the four-door hatchback's low, lithe, and long body is arguably the prettiest variation. The most obvious changes are in its Matrix-design headlights and restyled taillights that perform a sort of illuminated animation when the car is locked, unlocked, or when the turn signals are activated. Our S5 Sportback was the mid-level Prestige model, which starts at a $61,295. It arrived coated in the new and unique $595 District Green paint. With a few other extras, our S5 test car hit an as-tested price of $69,240. HIGHS: Balances performance and price, luxury and refinement when you want it, drop-dead gorgeous---especially in green.

Playing off the green exterior is a gray interior---Audi calls it Rotor Gray---with a leather upgrade ($1000) and carbon-fiber trim ($600). Although the S5's cabin is a lot like last year's, Audi has overhauled its infotainment system. A higher-resolution 10.1-inch touchscreen replaces the old S5's 8.3-inch display. The rotary controller and buttons that lived on the center console are gone, replaced by a small cubby. Despite the touchscreen, the new setup remains easy to use because it's located high on the instrument panel and features large icons and quick responses. Audi's Virtual Cockpit, a 12.3-inch digital gauge cluster that's standard on the Prestige model, has updated graphics and three new viewing modes (Classic, Sport, and Dynamic). Our S5 Sportback also came with adaptive cruise control, blind-spot monitoring, a Bang \& Olufsen sound system, a head-up display, heated and ventilated front seats with massage functions, a panoramic sunroof, and a power hatch.

To satisfy Goldie's need for speed, Audi fits a turbocharged 3.0-liter V-6 with 354 horsepower and 369 lb-ft of torque. That output is handled by a dutiful eight-speed automatic transmission and routed to the standard Quattro all-wheel-drive system. Our S5 had the $2500 S Sport package, which adds adaptive air springs, a torque-vectoring rear differential, and red brake calipers. It also had the $1150 Dynamic steering that changes from slow to fast depending on the selected drive mode and the vehicle's speed. Our example also featured the $2200 Black Optic package that brings gloss-black exterior trim and sharp-looking 20-inch wheels wrapped with Continental ContiSportContact 5P summer tires.

LOWS: Low-profile tires result in harsh and loud impacts over broken pavement, optional variable-ratio steering can feel hinky at times, a bit too subdued when left in the calmer drive modes.

Even if you set the S5's chassis and powertrain to their most aggressive settings the Audi doesn't beat up its occupants. The S5's competitor, the Mercedes-AMG C43, becomes a bit too abrupt in its shifts and harsh in its ride when you dial in its sportiest settings. When pressed to accelerate, the S5 Sportback bursts ahead with the V-6 sending a pleasant burble through its quad-tipped exhaust. The cabin is nicely insulated from wind and road noise, and its suspension is tuned to absorb uneven surfaces without sacrificing stability, although occasionally the small sidewalls can't provide the cushion needed to keep pavement breaks from upsetting the ride. We also wondered if we might have preferred the standard steering system's fixed ratio. Opting for Dynamic steering brings with it the possibility to vary the ratio from a quick 10.5:1 ratio to a slower 25:0:1 and everything in between. But, we did seem to notice the ratio changing, which led to some erratic responses to steering inputs when we took the S5 through the curves of our 10Best loop.

Not Too Slow, Not Too Quick

It doesn't always happen this way, but when faced with choosing between the A5, S5, and RS5, the S5 strikes us as the right compromise. We're aware that the be-hatched A5 is equally attractive and would save you $9000 over an S5, but its turbocharged inline-four might be too sedate to satisfy the power hungry. Likewise, the RS5 Sportback might be the quickest of its kin, but it's not as much fun as an Alfa Romeo Giulia Quadrifoglio or a Mercedes-AMG C63. An RS5 is also $22K more than a basic S5 Sportback. We think Goldie would agree with us that the S5 hits the sweet spot in this lineup. 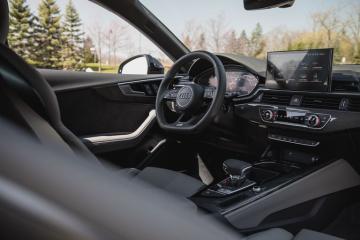